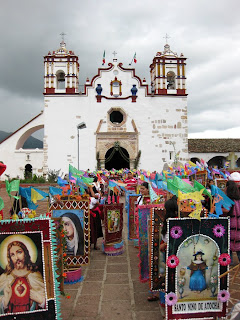 People were very proud and excited about the calenda for this year's fiesta celebrating La Preciosa Sangre de Nuestra Señor Jesucristo, the Precious Blood of Jesus Christ, because there were over seventy young women in it. This parade or desfile de mujeres, occurs twice in the weeklong fiesta, as does the danza de las plumas. 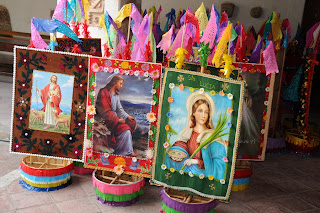 The women carry baskets or canastas, each one adorned with a saint, the Virgin or Christ. 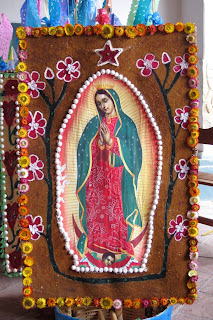 There is much preparation that goes into these events and I showed up early to watch the girls get ready. 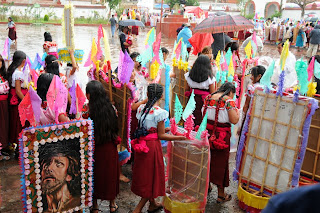 There were some very young girls who would be marching. 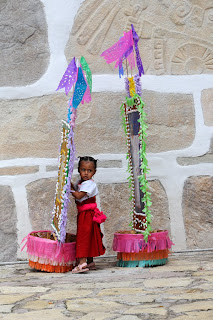 It is an honor to march in the calenda and all the women were dressed in traditional outfits of enredos, skirts woven on the village looms and fajas or sashes. These are all dyed with cochineal, the vibrant red dye for which Oaxaca is so famous. 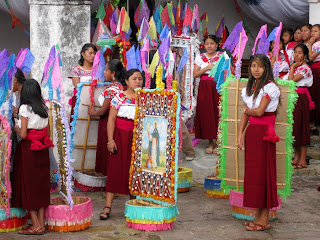 The calenda on Friday was building up and just getting ready to start when the skies opened up. Hey, it's the rainy season and all rains are a blessing. 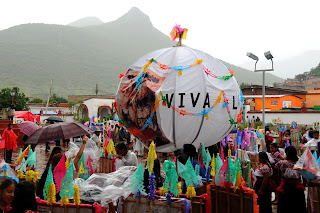 So we huddled on the porch to the side of the church and waited for the weather to break. It didn't, but it did let up and it was on. Led by a band, they headed out, a marvelous sight. 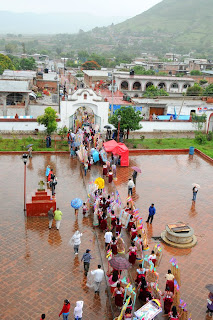 At the tail end of the parade was another band and the dancers from the danza de las plumas. Notice that the plumas are covered with plastic as were many of the canastas and women. The things are heavy enough without all the added weight from the rain. 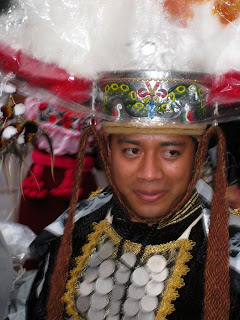 Once again I was up in the bell tower watching this guy ring the chimes. It was a glorious and deafening sound. 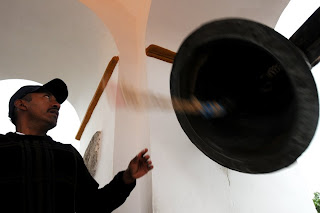 The calenda left the church to parade though the now muddy and water logged streets of the village. By the time I got down from the steeple they were long gone. I made a mad dash trying to find them. "They went thatta way," numerous people told me, but after a few minutes of searching to no avail, I wised up and went back to where people were patiently waiting and hung under a balcony trying to keep the cameras dry.Eventually, I spotted them way down the street headed our way. 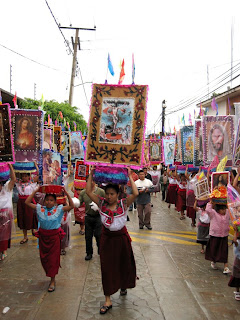 They walk through most of the village and it is a long way. The canastas are heavy and the rain added to the weight. 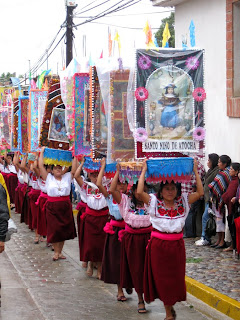 These women march with both arms up holding these baskets for what may be a mile or two. I wondered if I could do it. 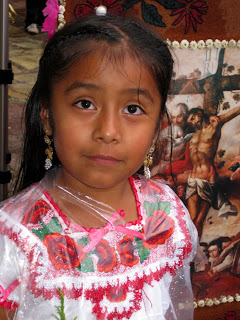 After an hour they all returned to the church where they had started. It was time to eat and continue the celebration. 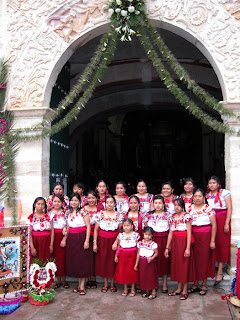 As I mentioned it is an honor to march and these two young women from Santa Maria, CA were in Teotitlan for the first time. 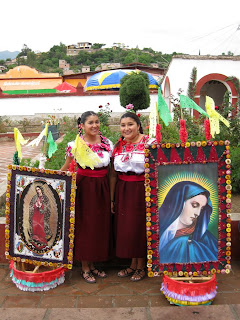 Their names are Brycé and Ixel Lopez and their family was so excited. Actually, it was their first time in Mexico, but they have many relatives living in Teotitlan, a huge extended family. They looked right at home. Man, I was envious. First time in Mexico and there they were, right in the middle of such and ancient and special ceremony.