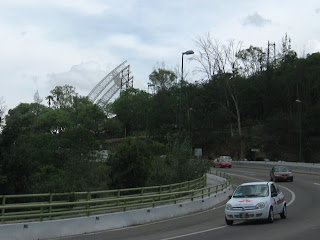 The Guelaguetza is coming, July 19 and 26 if I do the math correctly, and the roof over the stadium is, well, I don't know if it is proceeding on schedule. Seems like there is quite a ways to go, but I do not know the final design. It is hard to get a shot of because it sits atop el cerro, the hill overlooking the city and there is a major road in front of it. Yes, I could climb the stairs and get a better shot. I will next week. This is from Llano Park which is quite a good distance. 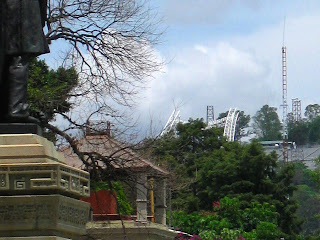 This one and the top one are from the car as I flew by. 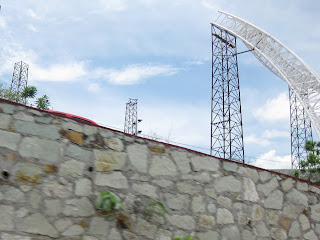 Will they make it?

There was a 6.2 earthquake last night at 2:22 in the morning and it was strong enough to wake me up. We had amazing rains last night, at times hard, but most importantly, long lasting. Lots of thunder rolling across the mountains and valleys. A dramatic night followed by a morning in which one can hear the plants growing.
Posted by Christopher Stowens at 6/30/2010 12:56:00 PM No comments: 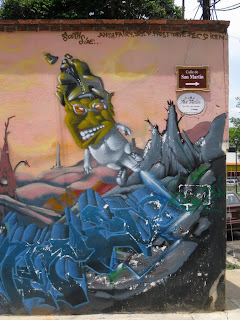 Took a nice walk from Jalatlaco to south of the zocalo. As always, the richness of the sights, sounds and smells were uniquely Oaxacan. 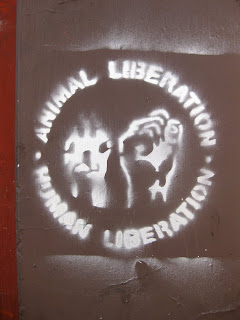 I shot enough for several posts, including the action at the planton in the zocalo, the roof over the Guelaguezta stadium and street life. I am always struck by the graffiti and street art. This poster on a corrugated wall with sun overhead made as good an op art piece as one could hope for. 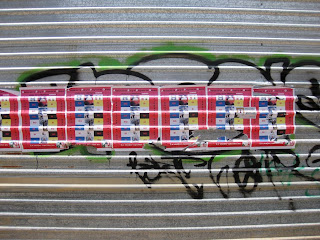 With the election next Saturday, this will all be history soon... like everything else. 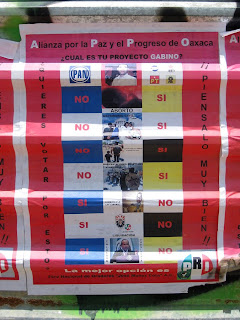 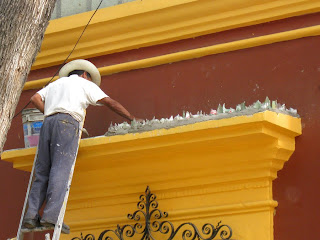 Now that I am back, I find myself seeing things with new eyes. It is like I am seeing it for the first time. The land has exploded with green and color. Within my sight as I write this, I can see five different colored hibiscus, bougainvilleas, jasmine, gardenias, lantana, spaths and a few things I can't name. It is lush.
But that is not the newness I am talking about. It is like seeing the world anew. My trip north was a whole new visual palette, culture shock of a sort, and I was struck how familiar sights seemed so unfamiliar, surreal. 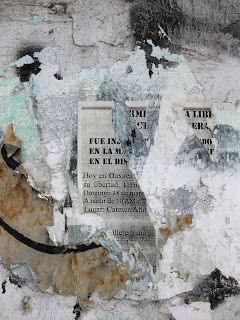 Maybe it is learning to see with a photographer's eye or perhaps it is seeing the world anew every three seconds. The latter being the gist of Blue' valedictory speech in Marisha Pessl's "Special Topics in Calamity Physics." At any rate, things look different.... but good. 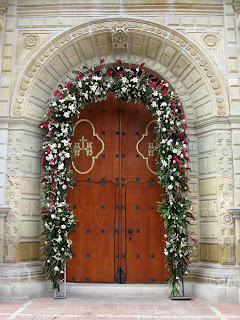 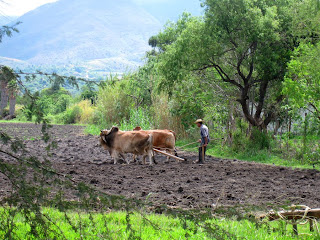 Those of you who missed me...well, you know what they say... How can you miss me if I won't go away or something like that. I took a quick trip to El Norte. Why? Well, for one, my doctor had a cancellation and I snapped it up. Don't get me going on health care.... at any rate, it made sense to see him this decade. Got a clean bill of health, so it was worth it.

So here I am where sights like these seem more normal than the things I saw at the North Shore Mall. Talk about feeling like an alien. It must have been my imagination, but people sure seemed like they were looking at me like I was one. Must have been my nice new Emiliano Zapata tee.
While I was gone, there was lots of rain and I returned to what was brown and now is green. Ahhh...
Posted by Christopher Stowens at 6/26/2010 07:10:00 PM 1 comment: 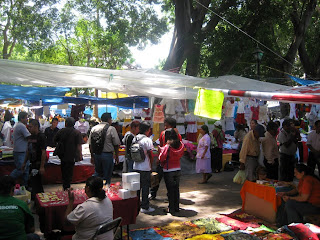 Just like everywhere else, Oaxaca has problems. With an election coming up on July 4th, everything seems to have been ratcheted up a notch or two. There are protests all over the place with blockades going up on some of the major roads and in front of supermarkets and malls. The planton continues in the zocalo. The water conflict between San Agustin Etla and the city continues. The Triquis conflict in San Juan Copala continues to attract international attention and is very tense. It is a mess. 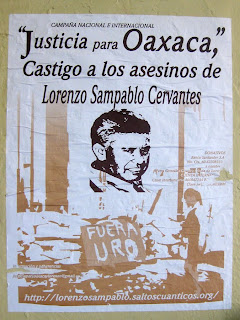 Scenes from the zocalo. Can you believe it, this is the northwest corner, the main entrance? 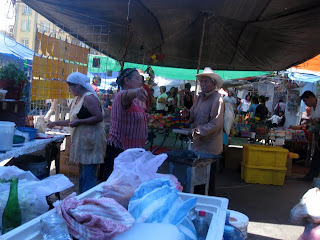 The cathedral from both sides, 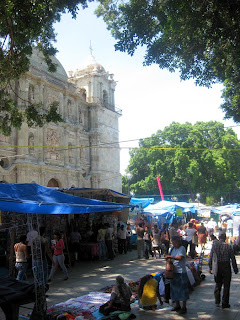 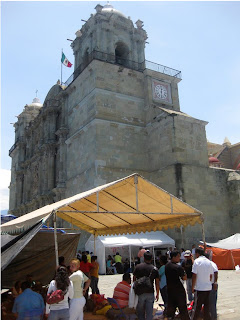 and south.
The reds are here. 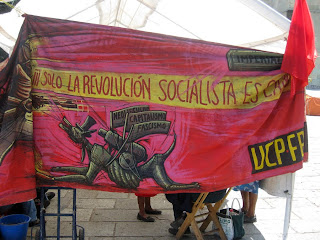 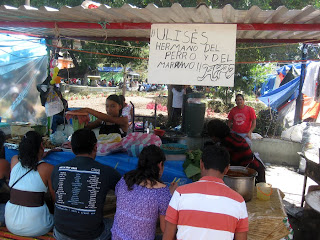 In speaking with people both in the villages and in the city, nobody is optimistic. Businesses are being hurt and consequentially, workers are too.

In looking to the north, it does not seem much better. In both places, the rich and the powerful corporations are running the entire show and the rest of us can just STFU. Politics as usual in the 21st century.

The most telling moment of the week for me was the media outrage at Paul McCartney's mild comment about the former president, who admitted to torture and the willingness to do it again and yet garnered no outrage from the those same pundits.
Posted by Christopher Stowens at 6/09/2010 12:02:00 PM 1 comment:

If a tree falls in the zocalo 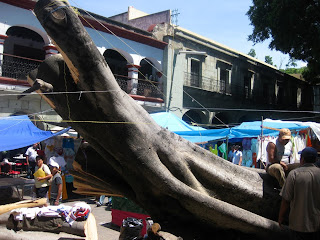 We have had some rains the last few days. In San Sebastian, last Friday, it rained hard for a couple of hours, but in the city it only lasted fifteen minutes. However, last night, Sunday, the winds howled and when I went into the city this morning I saw the damage. 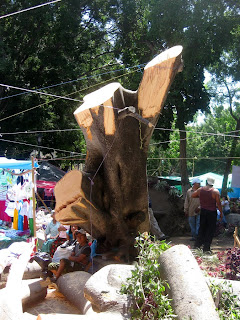 This huge 150 year-old laurel tree was blown down.
Pulled the roots right up. 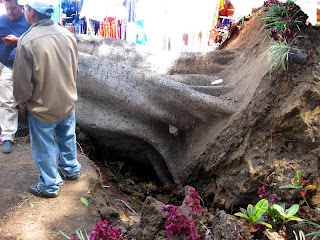 If you know the zocalo, this was on the very southwest corner. 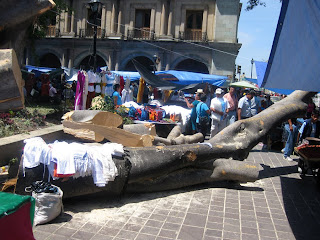 Looking at this I can't imagine that El Alsador Vasco, the Basque restaurant on the corner, did not get damaged, but word on the street was no one was hurt and the building looked fine to me. 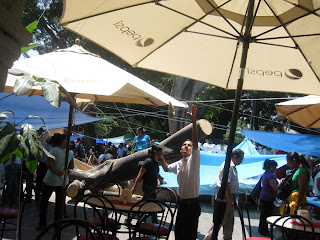 The same thing happened on the southwest corner of Llano Park, a huge tree came down.
Here is a newspaper story about it. Twelve trees were toppled in the city.
Posted by Christopher Stowens at 6/07/2010 02:57:00 PM No comments: 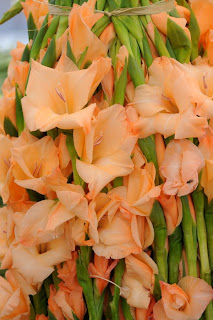 A couple of days ago, after my trek through Tlacolula, then over to Ocotlan and back, I returned to a house with no lights. I looked at the meters and they all looked like they were off, so I assumed the whole area was out. Perfect time for a siesta. When I woke up, there was still no power, so I went to my neighbor, who said she had juice and had had it all day. I then assumed that the CFE had cut me off for some reason or another. Maybe a payment had gotten delayed or misplaced. It would not have been the first time.

So I drove into San Sebastian to see the local commissioner, a lady to whom I had just paid the bill. She was very helpful and called the agency where they told her that the account was fine and that I had power. She said it must be a fuse and offered to have her husband come back with me to check them, but I declined saying I could do it myself.

I am the owner of a 100-year old house in El Norte. I can can fix anything, plumbing, electrical, carpentry, you name it, I have had to do it, but I could not find the fuse box of this house. I looked everywhere and then started looking under the ivy of the walls surrounding the house. And there they were, about ten meters from the house on the opposite side of the entrance gate. Of course it was a type of fuse I had never seen before, but I asked one of my neighbors for help and he showed me how to get the thing out and how to replace the filament inside it. Que milagro! I was back in business thanks to the kindness of strangers. Now I know how to change a light bulb, I mean, a fuse. 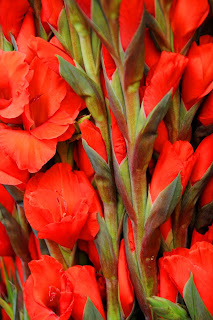 Well, today I went to the market in Etla and bought some gladiolas for the commissioner and took them over to her house. I was greeted by a pack of seven or eight dogs jumping at her fence and then by her husband. No, he was not jumping at the fence. I handed him the flowers over the gate and he told me that it was the first time anyone had ever done anything like that in the eight years of his wife being the commissioner. I told him that it may have been the first, but it would not be the last. I plan on taking her flowers every time I have to pay my bill, which is every two months. The crazy thing was that I had forgotten to get the flowers when I was at the market and when I got back to my car I almost bagged the whole idea, but I didn't. Good decision. Seeing how happy he was made me feel great. 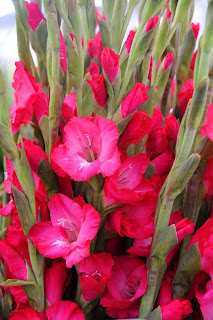 I think there is a lesson there, but I will have to figure it out. Maybe it will come to me after I take some mezcal over to my neighbor who not only showed me how to change the fuse, but also gave me a few extras for next time.
Posted by Christopher Stowens at 6/04/2010 03:12:00 PM 2 comments: 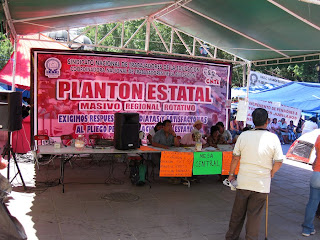 The teachers and APPO have taken over the zocalo and once again, it is filled with protesters, their tents, cars, food stalls, vendors, it is packed. 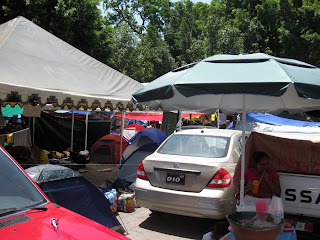 The weather is hot, hot, hot. I tried to walk around but all the ropes are a chest level for me. It was difficult. People just hang under the coverings. 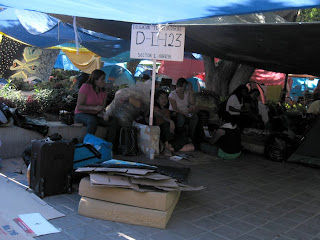 Businesses are really hurting. The cafes are barely accessible. Not only that, the protesters blocked the main supermarkets and malls yesterday as well as other governmental offices and agencies.
Whether or not this is an effective strategy to get the government to address their grievances remains to be seen. Seeing as though many of the problems have been going on for years, I am doubtful. The sit-in in the zocalo is scheduled for two more weeks.
Posted by Christopher Stowens at 6/03/2010 09:44:00 AM 1 comment: