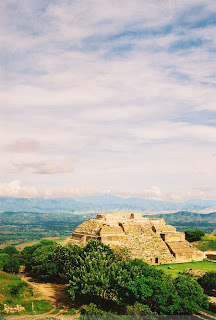 As for the archeological sites, Monte Alban is the pinnacle, literally and figuratively and so it should not be visited first because everything else seems anti-climatic after seeing it.

Here is a map of the area.

Mitla is a good starting point, an area where people having been living for almost 10,000 years. The site itself has about 3000 years of history and is remarkable for many reasons, the architecture and stonework being just two of them. 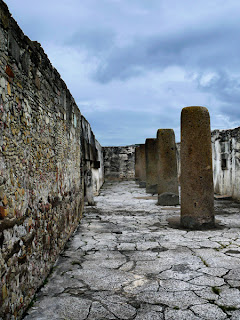 The complexity of design, the tightness and precision of the joints, the various techniques used makes it look like they were able to weave with stone. The fact that when the Spanish arrived, they knocked down some of the site and built a large church on the rubble is fairly interesting as well. 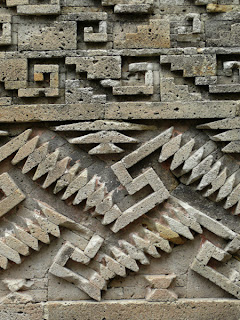 Normally, because the site is small, people don’t spend a whole lot of time at Mitla, but we took most of the day. Two photographers in a dramatic setting, we just shot and explored.
Mitla is southwest of the city and on the way back we stopped at Teotitlan for lunch at “Restaurante Tlamanalli” which has been featured in Saveur magazine and is run by the Mendoza sisters. 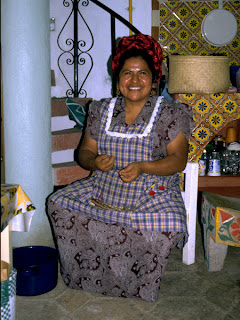 One of the most beautiful kitchens I’ve ever seen and the food is always very fresh and flavorful. The restaurant is a slightly hidden jewel, but famous and with fame, the prices are slightly higher. “Higher prices” is a relative term. The cost of all foods is low here, but so are salaries. 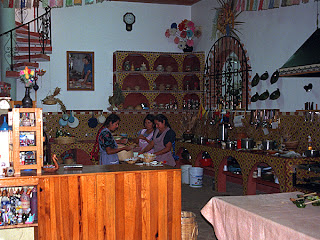 Closer to the city is El Tule, the tree with the largest circumference in the world and one of the oldest and largest living things on the planet. 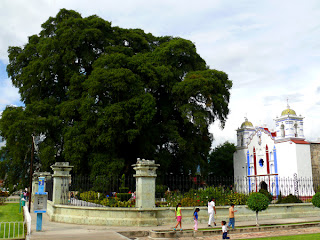 This is one big tree, hard to convey just how big. It makes the church look like a miniature, which it is not. The main road used to go directly through Santa Maria del Tule, but there is a bypass now and the village is much more attractive and peaceful now. 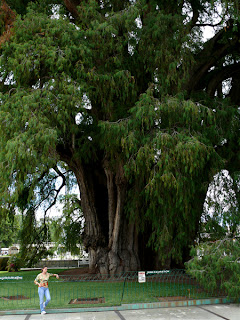 There are plenty of good places to eat and the gardens are immaculately kept. There was a large brass band playing at a baptism near the tree, all of whom were feeling no pain even though it was mid-afternoon.

As a former music teacher, I can tell you the bands here are excellent. Kids in the villages learn at an early age and there is live music everywhere. They do things with 6/8 that are crazy, but I will save that one for another time. At any rate, this band had a tuba player that was simply amazing. He was simply out of this world.

Yesterday we were off to the museum next to Santo Domingo, but the shopping and eating traps got us. Deal of the day – heavy-duty air pump (for bikes and wheelbarrows) $5. Sonya might say it was the blouses she bought.
Posted by Christopher Stowens at 9/14/2007 01:04:00 PM No comments:

Just passing it on... 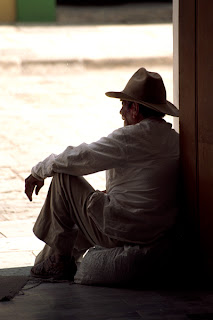 You can visit lots of places once or one place a lot of times. I guess I done a bit of both, but I have been coming to Oaxaca for many years now and have been blessed with getting to know local characters with long histories and great knowledge. They have told me stories and introduced me to others, who in turn, have shared with me.

After years of listening, learning and exploring the area, I am a good tour guide. Many locals have shared their hidden, special places with me and I try to pass them on. It may be a stall in the market with the best rebozos that years of looking has found or villages in the nearby mountains with tall pines and agave or maguey plants 12 to 15 feet across. Everyone has their favorites. Oaxaca is one of mine.

Sonya, my partner, arrived here last week from St. Thomas. Never having been in Mexico, other than a brief visit to Tijuana, she was struck by the green velvet look of the mountains as she flew in the late afternoon sun. With rain in the mountains and brilliant sun in the wide valley that is Oaxaca, hers was an arrival to envy, Monte Alban on one side of the plane and a full vivid rainbow on the other. She took it as an omen.

This is a magical place and we have begun doing all those things that you do when visitors come to your hometown, seeing all the sights that you don’t normally see. If you live in Boston, when do you take the tour of Fenway or in NYC, visit the Statue of Liberty? It is the same everywhere.

Oaxaca has a long list of “must sees” from the city itself, markets, to the villages and the people to archaeological sites and museums. And then there is eating and shopping, too.
Those of you, who have been here, know that those two activities have trapped many a visitor. “Whaddya mean, there was a museum? Monte Alban?”

Sonya is here for three weeks now and will be back for three months in December so we are taking things slowly and spending time at each venue. We are in no hurry.

Thus far, we have visited the villages of Teotitlan del Valle, San Martin Tilcajete and explored around San Agustin. 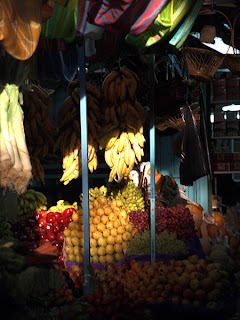 Wednesday is market day in Etla, which is only five kilometers away to the north and yesterday we came home loaded with fresh cheese, avocados (6 for $1.50,) mangos, more vegetables and fruit and enough cut flowers to fill the house.

A dozen long stem roses is about $5, I think. I don’t really know for sure. because we got so many gladiolas, lilies, roses, etc that I did not break down the final bill. Two armloads for about $15. 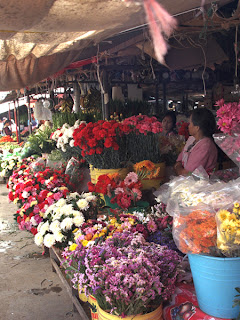 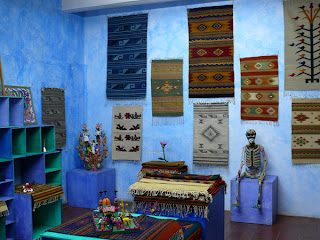 These are some of the first pictures of this incarnation of Corazon del Pueblo. In its other lives it was one of Oaxaca’s best folk art stores run by Rosa Blume, native of Morelia, with a lifetime connection to the folk arts of Mexico. The store was located upstairs from Amate Books and overlooked one of Oaxaca's main pedestrian walks, Alcala, which leads from above Santo Domingo to the zocalo. The store is still upstairs, but is now in the rear overlooking a courtyard.

Rosa has left town for a year and given me the keys to the place. I thought I would make the space available to artesanos from the pueblos. No one is visiting the villages. We were in San Martin Tilcajete yesterday and they said I was the only visitor they had had in a month. Business is non-existent in what were once thriving towns with a lot of economic income from folk art.

Each village has its own specialty. San Bartolo Coyotepec is known for black pottery. Arrazola, San Martin and La Union for woodcarving. Teotitlan del Valle for weaving and rugs. Ocotlan for ceramic sculptures and the list goes on.

And they are all hurting.

There are lots of people in the city, but they are not coming to the villages as of yet. The populations of these villages are following a familiar pattern of men and young people leaving to find some sort of income for themselves and their families. There are pockets of Oaxaqueños all over the U.S.

If the people won’t come to the art, the art will come to the people.
The hope is that Corazon will become a central and prime location for the artesanos.
To get some income comin' in. 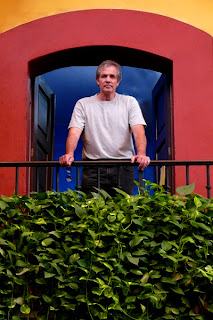 The rugs are by Zacarias and Antonio Ruiz from Teotiltlan del Valle. The carvings are from several artists in La Union and San Martin, including Jesus Sosa. Claudio Ojeda from Arrozola is also bringing in some spectacular pieces.

My hopes for Corazon are that it will specialize in unique pieces of quality and it will enable people to connect more directly with the artists. If there is a specific piece you want, we will try to find it or to produce it.

There is more coming in each day, but September is slow and the official opening will not be until the first week of October.

Of course, if there is something you want, just let me know. I have years of getting to know the artists and their villages. I know I have but scratched the surface, but these coming months should be a great education. 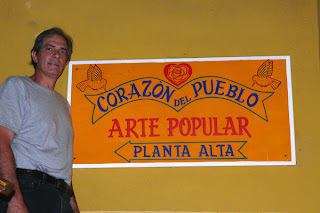