As a musician, teacher and occasional prankster, I laughed out loud at this one. Genius!

This guy came in to help me with the finish work in the kitchen. I hope it isn't too, too much. I was worried that the columns might not work, but I think the guilding will really set them off. What do you think? 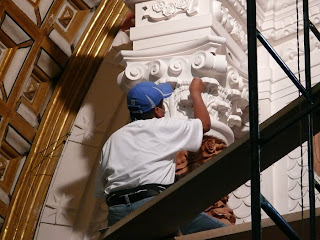 Actually, this is restoration work on the south side of Santo Domingo. The work is immaculate, fastidious and beautiful
Posted by Christopher Stowens at 2/25/2009 06:25:00 AM 3 comments:

Oaxaca has been hit by a series of earthquakes which is somewhat normal, but scary nonetheless. From what I can find out, there was a 6.4 one on Feb 12 and then yesterday, there were five more, the most powerful being 4.1.

There was some damage to structures in Juchitan in the Isthmo. I remember having a pretty good meal in the market there and being dazzled by the hupiles that all the women were wearing.

Earthquakes are just plain scary. If you've been in one, you know what I'm talking about. If you haven't, you can't imagine it.

The days are getting longer and lighter now. The equinox is in sight. My work up here is proceeding, but seems Sysiphusian.... that seems to be a constant in life. One thing leads to another and so on.
That is certainly how it has been with putting in a new kitchen. All that is left is the painting, but of course that means everything off the walls and the kitchen is connected to two other spaces which also need painting... Sysiphusian.

Over the years, the collection of art took over the house, so we are talking a big packing job and seeing as though I packed up all the other rooms before I painted them, I am packing up everything in these last three rooms. At one point, the collection had almost 3000 individual pieces, many of them unique and museum quality. But now's the time to pack them up. Everything is boxed and labeled. The large pieces are in baskets or storage bins.

At times, I thought I would never finish. Plus, it was sad to pack up so many special pieces. Each is linked to a series of memories, experiences, like packing up your past. 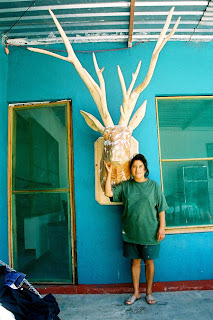 At any rate, I am glad I did not need to pack this deer head from Claudio and Teresa Ojeda of Arrazola. Believe me, it was close. I did get the pavo real, the peacock, but it broke down in to small pieces, so it was a snap. 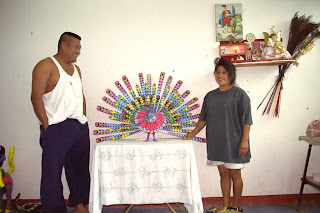 After seeing so many portraits and Salma Hayek in the movie, to find this video of footage of Frida Kahlo and seeing what she really looked like, how she moved, smiled, kissed...

Monte Albán sits to the west, high above the city and is one of the first sights one sees as you fly into Oaxaca. It is always a spectacular vision, as the white stones used to construct this huge site seem to catch light even on cloudy days.

There has been much restoration since this video was shot. I need to reshoot. Actually, I did, with a new camera no less, but I cannot find the tape.... yet.

I always love going there and have been many times. I do wonder if Monte Albán is like the Statue of Liberty and is only visited by tourists? Certainly it is packed on certain days, but on this day I was almost alone in the place. There were a few worker there and I watched them and imagined the early inhabitants doing much the same. It was a lush and green as I had ever seen with standing water that looked like a lake in the central courtyard.
Posted by Christopher Stowens at 2/13/2009 06:17:00 AM No comments: 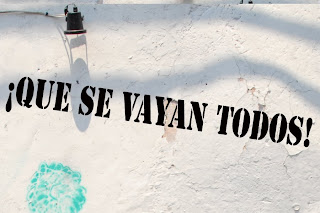 Like a lot of people, I read a lot of newspapers and blogs. I have always enjoyed politics, both playing them and observing them. Politics, the game of human interaction, is easy to see and exists wherever more than one person lives.

Right now, I am watching the US, local Mass stuff, the Virgin Islands, Oaxaca, the small carving villages outside the city and my old prep school and guess what? There is a world of hurt out there. It is patently obvious to most of us.

However, the ruling social and political classes, seem blind and are behaving like what they are born and bred to be - you know. morons.

So Naomi Klein's words resonated with me.

"Watching the crowds in Iceland banging pots and pans until their government fell reminded me of a chant popular in anti-capitalist circles in 2002: "You are Enron. We are Argentina.

Its message was simple enough. You--politicians and CEOs huddled at some trade summit--are like the reckless scamming execs at Enron (of course, we didn't know the half of it). We--the rabble outside--are like the people of Argentina, who, in the midst of an economic crisis eerily similar to our own, took to the street banging pots and pans. They shouted, "¡Que se vayan todos!" ("All of them must go!") and forced out a procession of four presidents in less than three weeks. What made Argentina's 2001-02 uprising unique was that it wasn't directed at a particular political party or even at corruption in the abstract. The target was the dominant economic model--this was the first national revolt against contemporary deregulated capitalism.

It's taken a while, but from Iceland to Latvia, South Korea to Greece, the rest of the world is finally having its ¡Que se vayan todos! moment.

The stoic Icelandic matriarchs beating their pots flat even as their kids ransack the fridge for projectiles (eggs, sure, but yogurt?) echo the tactics made famous in Buenos Aires. So does the collective rage at elites who trashed a once thriving country and thought they could get away with it. As Gudrun Jonsdottir, a 36-year-old Icelandic office worker, put it: "I've just had enough of this whole thing. I don't trust the government, I don't trust the banks, I don't trust the political parties and I don't trust the IMF. We had a good country, and they ruined it."

Lina Fernandez is a poet, writer, herbalist, teacher and chef. She was an artist in the kitchen, always singing, talking and smiling while she cooked. Her restaurant, El Laurel had only ten tables and was in a cool courtyard off of Nicholas Bravo Sadly, it is no more. I remember sitting there, sharing the space with Toledo and Morales, two of Oaxaca's famous painters. I met photographers, poets, film makers, writers and other eclectics as we all came for Lina's delicious offerings.

Her chiles en nogada were famous and when word got out that she was making them, people literally flocked into the tiny space. The video is cut from a longer shoot in which I spent the entire day with Lina as she shopped, chopped and cooked. In the longer version, she talks to me, the camera, and says, "You are to blame for this, Chris. I wasn't going to make them this year, but you gave me a motive."

Little did I know that she was closing the restaurant the next month and this was the last time she made chiles en nogada for her many friends at El Laurel. As I re-watch the tape, I realize now that she was telling that it was over and there is a poignancy to her words. Like watching a movie the second or third time, the things one notices that were there all the time, but missed, caught up in the moment.
Posted by Christopher Stowens at 2/07/2009 08:41:00 AM No comments: 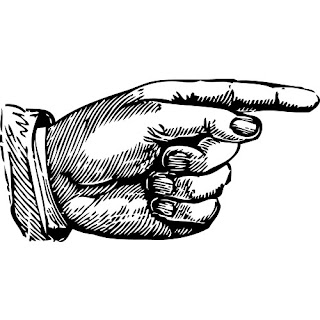 And appreciate, I am sure, that you can now click on the right and get your very own copy of Here & Now on iTunes and most of the online music stores.
Posted by Christopher Stowens at 2/06/2009 01:38:00 PM No comments: 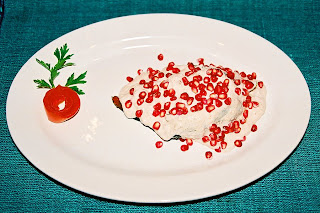 Well, I had my first meal in the new kitchen and no, it wasn't either of these two dishes, but I was too tired to photograph it. I had my first salad in weeks w/ lettuce, apples, grapes, onion, garlic, carrots and blue cheese, baked chicken and a potato. All very simple and so tasty after weeks of living out of the bathroom sink and the microwave.

I am doing much of the finish work in the kitchen myself which meant a few days of working outside in the ice and snow, but at least I have all the tools to do it. Pictures shortly.

The above dish is chiles en nogada from Casa Oaxa. I have a couple of different videos of cooks making this special dish. They might be fun to post. 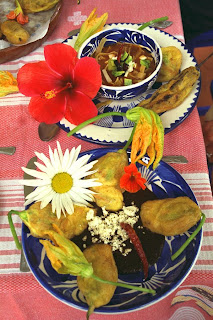 And these are stuffed squash blossoms and mole from good friend, Pilar Cabrera, who teaches cooking and operates La Olla restaurant in Oaxaca. That is also her sopa azteca. I still think she makes the absolute best version of this traditional soup. Yes, I have a video of her making it. 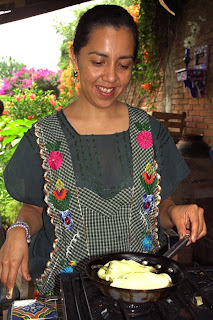 A Day Late, but

I missed posting on B.A.D (Blogroll Amnesty Day) but who cares, a day late, a dollar short. Here are blogs to check out:
Panini Girl is a wonderful blog about food, cooking and things Italian, although like all blogs Janie touches on many subjects. She is an amazing cook, so knowledgeable and informative. Fun to check everyday.
Two others by former students, both of whom are amazingly talented and smart. Taiwanablog is by Michael who is teaching in Taiwan. Here We Rest is from Jessica Elaine in NYC and outer space.
Posted by Christopher Stowens at 2/04/2009 10:14:00 AM No comments: