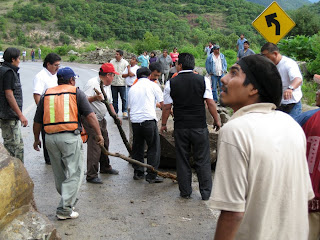 With the rains come landslides and rocks crashing down the mountains onto roads filled with hairpin turns. Yesterday, on our drive back from visiting Acatlan de Osorio in Puebla, we came to a screeching halt for this one. 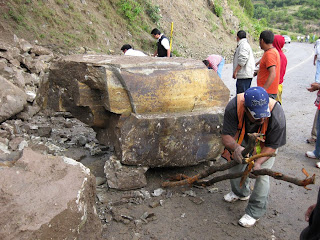 Cars were backed up on both sides and people jumped out to clear the road. No one was going anywhere fast and we quickly realized it was up to us to do the job. There was no waiting for heavy machinery to show up, it could take days. So as folks posted lookouts for additional falling rocks, we all pitched in to take care of business. Henry and I did our part. The two of us could have moved it by ourselves, but we didn't want to spoil the fun.

Every few minutes someone would yell, "Aguas, aguas!" and we would all jump out of the way as more rocks came tumbling down. It was hairy and scary, but everyone was still having fun. So I learned that "aguas" means "watch out" as opposed to "cuidado" meaning "be careful." We speculated that maybe it had something to do with chamber pots being dumped from balconies, but who knows? Actually, Henry says that it comes from people throwing water out onto the streets after cleaning their homes. 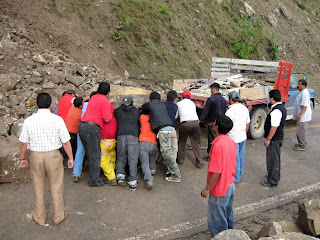 Eventually, we moved it with the help of the guy on the far right's truck. He was a stone worker and had a good idea of what he was doing. The guy on the far left was the normal self-important jerk who had just cut in front of tens of cars. Everyone yelled at him, "If you are going be like that, you have to at least get your hands dirty." He didn't.

Wow, that's an original way to spice up your day :D