The Guelaguetza has arrived 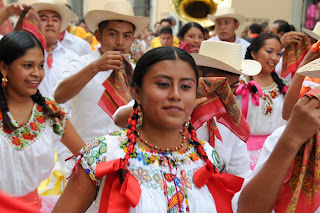 The last two Mondays in July are always filled with dance and people are here in droves. It is a joyous time, when people from the seven regions of the state show up to strut their stuff. There are day long shows in el Cerro del Fortin, the amphitheater overlooking the city. It is a long day for both dancers and audience. There are shows in the evening as well. The streets are filled and let's hope they give Oaxaca a shot of much needed dinero. Restaurantes, cantinas and various stores should benefit.

The Guelaguetza in its current form has been taking place since 1932 and it is always spectacular as the traditional outfits and dances are breath-taking. It starts with as desfile or parade with each region dancing by accompanied by a band. You should be able to identify each region by their look. 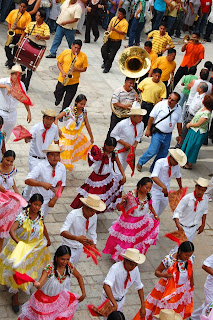 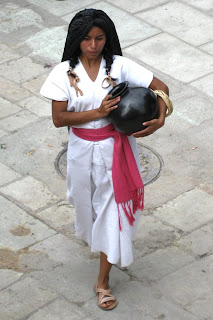 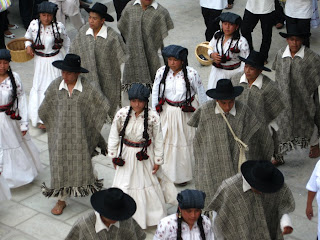 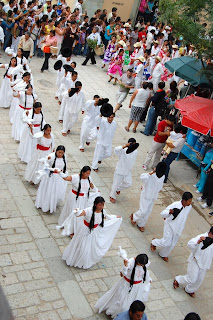 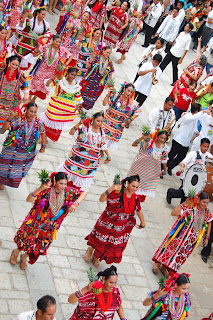 It is important to note that Oaxaca has the Guelaguetza for themselves, to show their pride and traditions. It is not for tourists, although many show up. 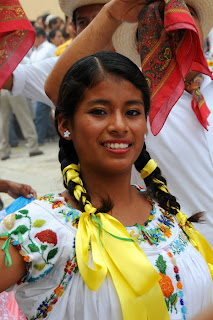 There are similar smaller celebrations in many villages at the same time with absolutely no tourists, just for themselves. 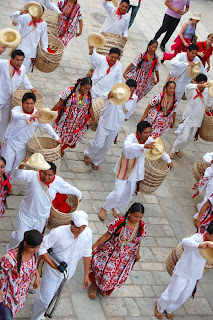 While this desfile was going on I wandered up to see APPO and the teacher's alternative "Guelaguetza" which was in a courtyard across form Santo Domingo. 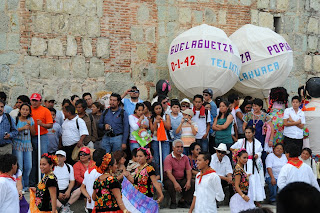 It was relatively small, maybe 1000 people, with dancers and a band. Everyone in good spirits. 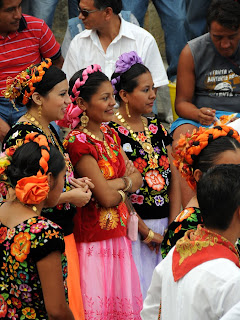 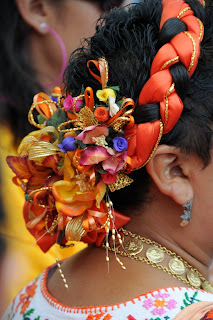 It was a bit unnerving, as everyone was carrying thick sticks or dowels about four feet long. Just the sound of them hitting the ground made me nervous. I hasten to add, I have no idea what they were for and maybe my reaction was just based on my ignorance.

Thanks to Henry Wangeman and his wife, Rosa Blum for sharing their photos with me for this posting. In an effort to prevent protesters from disrupting the desfile, the government put out a false schedule and it worked. It fooled not only the protesters, but lots of other folks as well. And the desfile moved by very quickly. By the time I saw it was happening, I ran back just in time to see the end. So all the shots from above are Henry and Rosa's. Muchas gracias!
Posted by Christopher Stowens at 7/21/2009 10:47:00 AM

Fabulous...the woman with the water jug. All of them, actually..

The images and your experiences are amazing. You are helping bring Oaxaca back to life. Keep it up the people need you. Have you thought of teaching the children music, since that is your expertise. Not that your writings and photography aren't that of expertise.