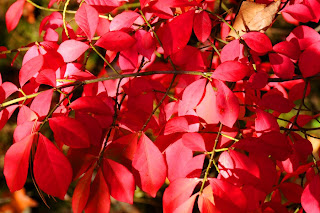 A bit of a break to watch autumn in New England. Also, the election campaigns, the financial meltdown and los pobres - Las Medias Rojas. What can I say? The world is going even more crazy than we thought possible. Still, everything is just fine. When we hit bottom, the only way to go will be up. Wheee!

Plenty of Oaxacan stuff to post shortly and some new video projects. El Dia del Muertos is right around the corner.
Posted by Christopher Stowens at 10/25/2008 09:54:00 AM No comments: 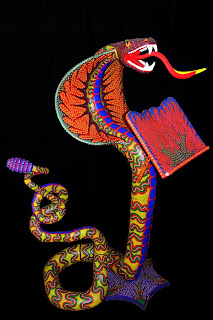 Claudio Ojeda and his wife, Teresa are two very fine artesanos from Arrazola, the carving village at the base of Monte Alban and closest to the city. 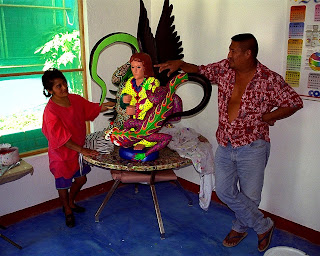 Their pieces tend to be very large, maybe the largest in all of Oaxaca. I remember seeing an anaconda of theirs that hung on two sides of a courtyard and was 37 feet long with a diameter of at least 2 feet in spots. Teresa's painting is some of the absolute best. She has developed a style using background colors covered with raised multi-colored dots of paint that is intensely time-consuming, but the results are spectacular. 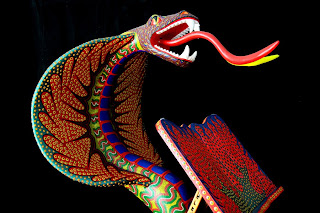 Claudio is a real character, a classic zapotec warrior, if you listen to him. He is tough and funny with strong opinions and a good knowledge of how things work in a complex world. He is worldly. I have several of their pieces including two atriles (music stands) one by Claudio and one by his son. When I first approached them about an atrile, Claudio said he needed an inspiration... and an anticipo, some money up front. I left and came back a few months later and Claudio said I had to come to the house to see the idea. I got there and he hooked up a very funky VHS machine and put in an even funkier tape and said "Karate Kid 2. Look at this"" What I sort of saw on that snowy TV was a large cobra or that's what Claudio said it was. And these are the results. 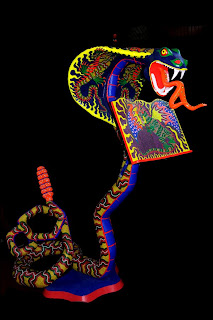 I was extremely happy with the first at almost two meters tall and a couple of hundred pounds. It has been exhibited a few times. Now the second one, a slightly different story. I showed up at their house and despite me saying I don't have room. What do I need with two of these babies?" They said "Seriously, you are not leaving without it."
Posted by Christopher Stowens at 10/09/2008 03:33:00 PM No comments: 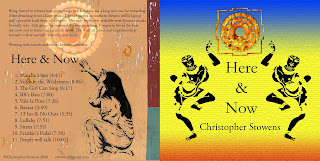 Oh, and I put the finishing touches on my latest CD, which I hope to get up on iTunes and Rhapsody very soon. Of course, you can order one direct from the source if you want. It is a captivating music. Folks that have heard it have all loved it, but for me, it was simply a joy to work on because I was forced to learn how to make music in a whole new way. Now, how to market it, one of my strong suites.... not.
Posted by Christopher Stowens at 10/08/2008 04:36:00 PM 1 comment: 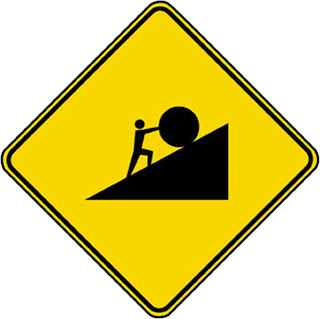 What have I been doing? I ask myself that same thing everyday. Just taking it all in and holding on as best as possible. I had a list of things to do when I returned from Mexico. Fixing gutters, scraping and painting a portion of the house -a side a year. The hail earlier this summer did so much damage, it looked bad. As in many things, prep is 90% of the work. In the last few days I have been putting on the final coats of paint and the job looks good. It feels equally good to have worked so hard for so many days and to have finally completed the work. Of course, I realize that it is Sisyphisian, never-ending, there is always something more to do or something falling apart, but still...
Its autumn in New England. Mornings are cold and the sun goes down earlier everyday. After being in the warmth for so long, it feels strange to be cold and to realize that paintingm which is actually fun for me, will be impossible in just a few weeks. Unless global warming kicks in. Who knows, maybe I'll be up on a ladder in December.
Posted by Christopher Stowens at 10/08/2008 04:15:00 PM No comments:

I have decided to unsuspend my blogging. As many of you must have noticed by now, I suspended it to address the national and now global, financial meltdown. I promised not to blog until I had fixed the problem. Now, obviously, I succeeded beyond my wildest expectations. Problem solved. Oh ye of little faith..... shame. Let the good times roll... I'm back.
Posted by Christopher Stowens at 10/06/2008 04:55:00 PM 1 comment: