There are so many aspects to El Dia de los Muertos, it is impossible to begin to describe.  Much of it is visceral.  It needs to be experienced. 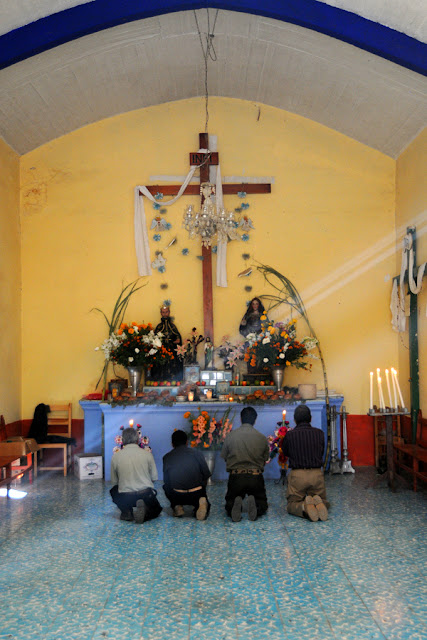 Yesterday in the small chapel or capilla, in the cemetery in Teotitlan del Valle, was such a moment.  The chapel is empty save for the altar, so it is acoustically very resonant.  These four men came in, knelt before the altar and began to sing.  It was a combination of Tibetan and Gregorian chant.  The words were Spanish, but the atmosphere was entirely Zapotec.  The sound was unworldly and mesmerizing.  I got some of it on video and will post it later.  The air was filled with the fragrance of copal and smoke.  The sun beamed in and blessed the day.  In truth, you had to be there. 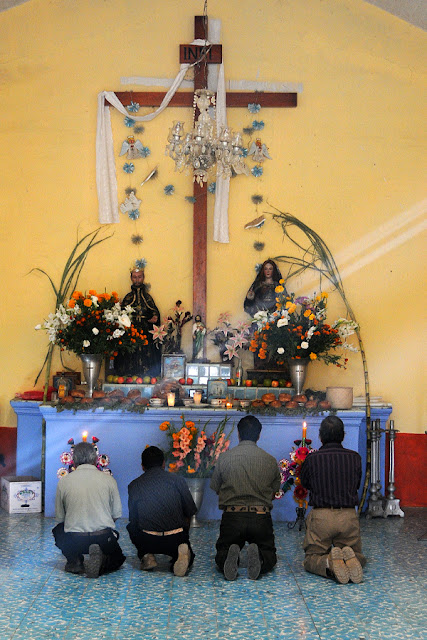 That is very special. I wish I had been there. I can't wait for your video.

I noticed that many of your photos are from Teotitlan. Why have you focused on this village?

Thank you for all the Dia de Los Muertos photos. Your display is better than the newspapers.

Teotitlan is a very special village, where they work hard to maintain traditions in these changing and challenging times. It just has everything. Plus, really nice people and really, really good food.

Thanks for the kind words, Joan. When I recover, there is some mighty fine stuff to post.

I agree that Teotitlan is special. I bet there is no other place like it on earth.

I agree with the previous commentor-a special moment- but a sacred moment-the photographer's veritable "decisive moment"- as a photographer and an observer- has this crossed the line from the sacred to the profane - am I entitled to record this moment because I have a camera in hand- when does the subject become the object- tricky question- but as for me- I'll pass on viewing the video.

That's your choice and your opinion. However, you were not there and you do not know the circumstances. I am always respectful in terms of shooting or not. What would you say if I told you I was encouraged to shoot and record it?

I'd say you did your job