Lila Downs in Oaxaca - Oaxaqueña all the way 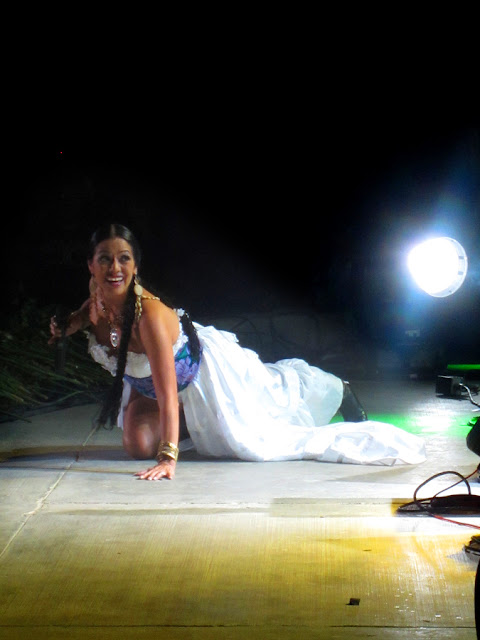 Last night, in the Auditorio de Guelaguetza, Lila Downs and her band performed and it was a wonderful show, filled with music, beauty and pride.  Lila is a oaxaqueña and was received as such, meaning with love, respect and joy. 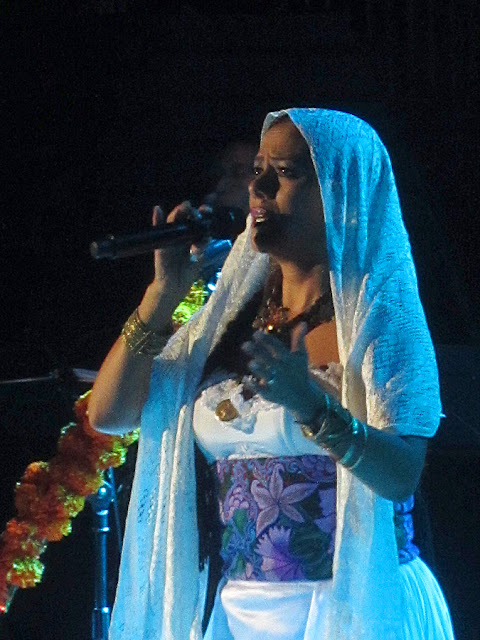 The opening group was La Momposina,  a large ensemble whose music had a Caribbean feel.  Their set was filled with dance and lots of rhythm.  I think they had eight percussionists and they laid out some incredible grooves, hypnotic and trance-like.  Really good stuff. 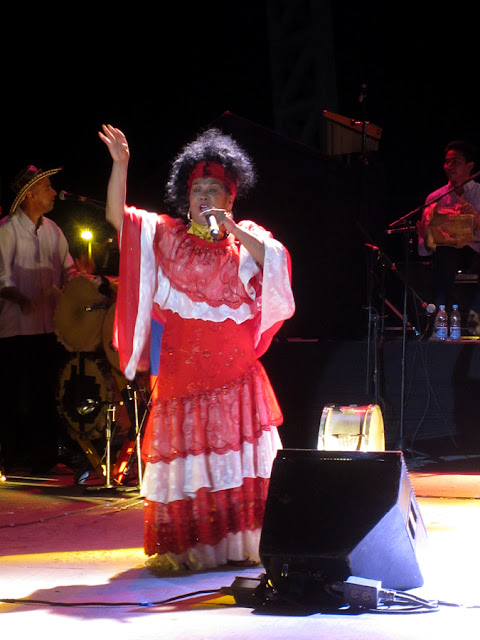 After an hour set, Lila hit the stage and it was pure love... and mighty fine music.  She is such an accomplished performer with an amazing vocal range.  She can sing operatically and she can belt with the finest cantina singers, with a wide range of styles in between.

She had a bottle of mezcal with her when she hit the stage that she carried forward, poured a little on the ground, a tradition zapotec blessing, took a sip and the show was on. 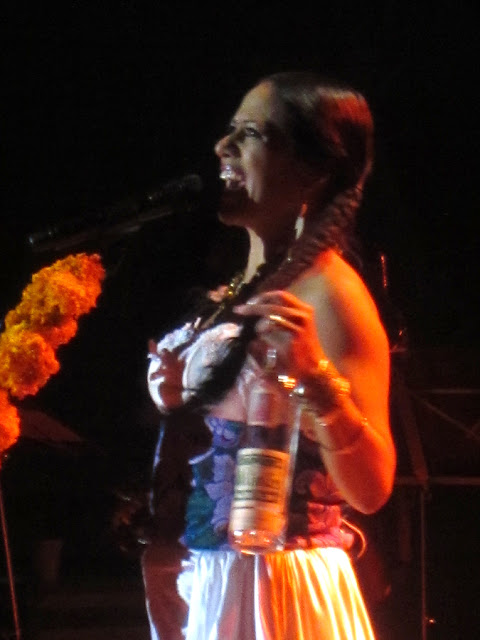 I have to say, the new roof on the auditorio really worked for me.  The sound was good, although loud. La Momposina had a bass drum that one felt deep in one's soul... and that was if you were a mile away.

The one thing I would say is that with the first group, one watched the whole band and all the dancers.  With Lila, I did not notice anyone else on stage.  My eyes never left her.  She is that powerful a presence.  And man, can she sing. 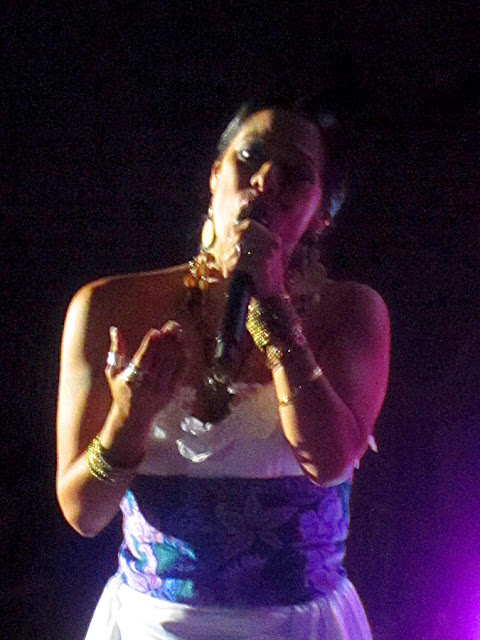 Lila sang some things from her latest album and some classics like, "La Llorana" and "La Martinana" (one of my favorites) many of which, the crowd sang with her. 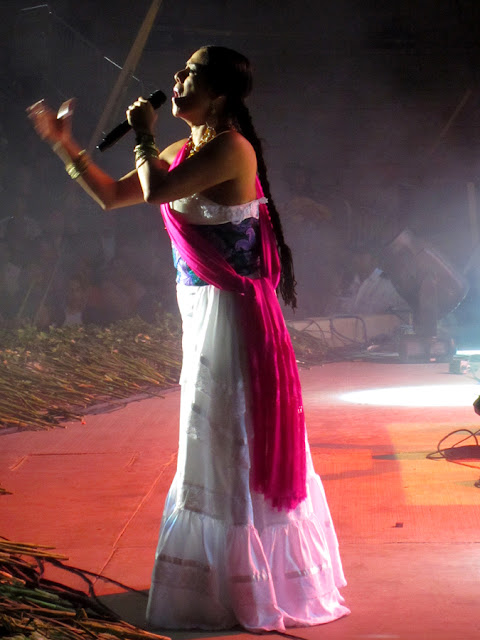 Here she is in a serape from Teotitlan del Valle.  If I had to guess, I would say it was from Arnufo Mendoza. 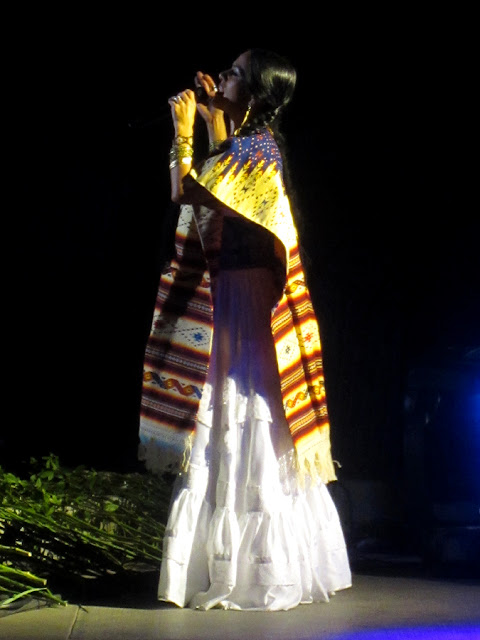 Photos were tough because, uh, it was dark.  I should have brought a different camera, but here's what I got. 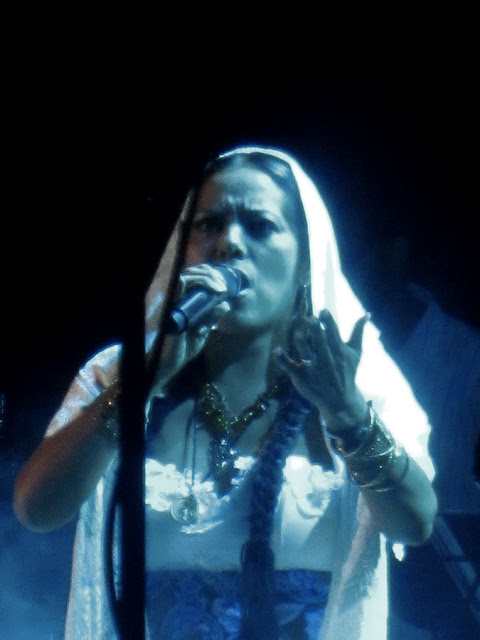 From the closing number, "La Llorona." 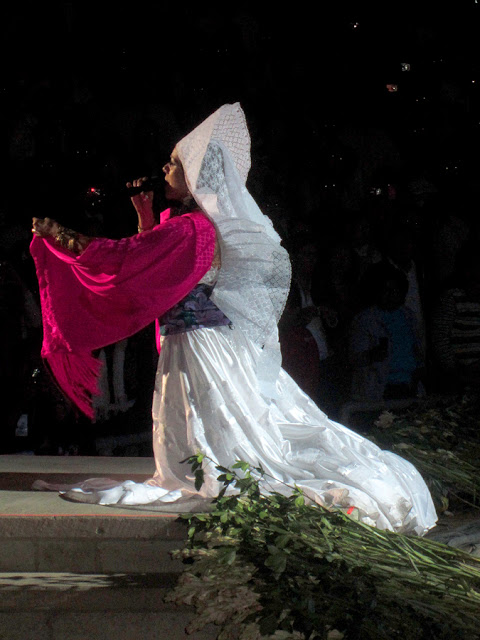 Soooo jealous to have missed this. Your first shot of Lila says it all. Great pics.

You missed a good one. Obviously, Oaxaca is a special place for Lila. She lives here, so there was a really special energy goin' on.

Great to meet you finally. Come back soon. I mean, CT in Feb???

The sarape that Lila Downs wears was handwoven by Erasto "Tito" Mendoza of Teotitlan del Valle, a cousin of Arnulfo Mendoza. Lila commissioned it from Tito several years ago. Tito worked for Arnulfo at La Mano Magica, but two years ago he and his wife, Alejandrina Rios, opened Galeria El Nahual on 5 de Mayo in the Centro Historico where they show Tito's work. Tito is also a featured artist at the summer Santa Fe International Folk Art Market.

Gracias, Norma, for the info on the beautiful serape. I want one! But I want to play piano for Lila, too. I guess we can't always get what we want...hmmm, that sounds familiar "We get what we need."

I will have to stop in Tito's galeria. What beautiful work!!

That was a terrific concert! Good to see the photos...