The same, only different

It seems like I go from taking care of one place to taking care of the other, San Sebastian Etla to The Garden City, Newton, MA.  The differences are profound.  For various reasons, those being cultural, financial, spiritual, aesthetic and a few others, I prefer the former.

I am a campesino in both places, except that there are no campesinos here, so I guess I am the guy who shows up every now and then to take care of the house.

Ah.... houses.  It is always something.  Problems and pests.  No, leaf-cutting ants here, but the temporary bane of my existence, squirrels. 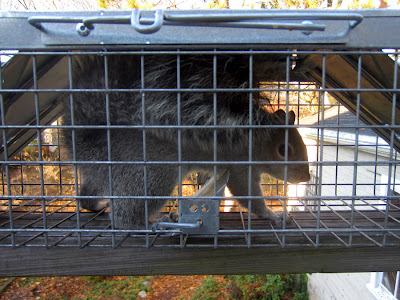 I had a friend that called them "rats with bushy tails."  I had not really ever cared one way or the other... until now.  They moved in and enjoyed the new insulation job I did in the attic and when I sealed that off, they moved into the roof over the kitchen,

This was not good.  It was war.

I tried everything, but eventually went with a couple of Havahart traps, one of which was too small for the big boys.  However, I have managed to catch fifteen of the little darlings and relocate them in Norembega Park..... on the other side of the Charles River.  Plenty of oaks there and I hope they are happy.

I would add that I was surprised how dirty and disgusting the whole adventure has been.  Also, too, there were times when I felt like Travis Bickle.
Posted by Christopher Stowens at 11/22/2011 02:51:00 PM