Los maestros de Seccion XXII did their thing yesterday across the state by shutting down roads, shopping malls and access to parts of the city.  This story from Noticias pretty much covers it and really, it ain't no new thing.  These actions have been going on for years... uh, dare I say it?  A classic Mexican standoff? 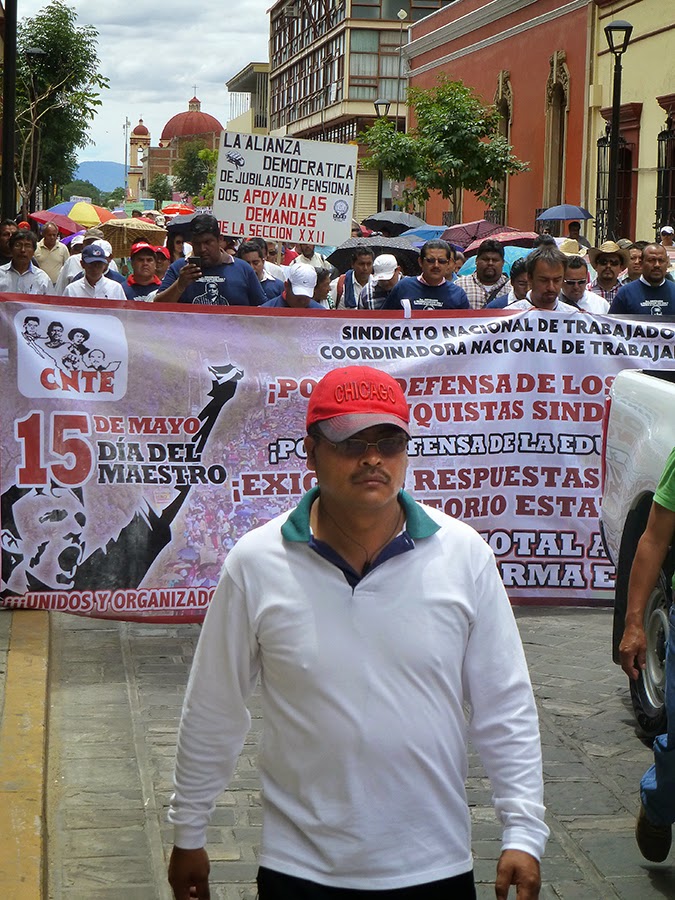 Listen, I know the teachers have legitimate issues, but it seems that there are directly opposing concepts at work here.  They say they are fighting for "the people" and then do everything they can to inconvenience and piss off those "people."  Because there are so few major roads and because so many people live in outlying areas, the blockades have a dire impact on many businesses.  Not only is there no free flow of traffic, but thousands of workers cannot get to or do their daily jobs, which I imagine ends hitting them in the pocketbook.

Meanwhile, back at the ranch, the teachers are not teaching, the kids are not in school, the politicians issue platitudes and do very little, the obvious corruption continues, the state's economy takes yet another hit, which it can ill afford as Oaxaca is Mexico's poorest state.

What I don't get is the concept of "If we make things worse, things will get better."  Yeah, that always works out well.

And it ain't only here.  This from Boston of all places.  Srsly, WTF???

It was announced today that the Boston Public School department is "reorganizing" by eliminating all Departments of History & Social Sciences in all schools and folding the departments into the Department of English Language Arts as a "Humanities Department" with the currciculum determined by the ELA Common Core Standards.  Certified history department heads/chairs are being laid off and, apaprently, no certified history specialist will be hired to replace any of these teachers. This essentially eliminates history and the social sciences as one of the core academic departments in the Boston Public Schools and subordinates HSS to ELA.  This appears to be the first major metropolitan school district to reduce history and the social sciences to merely a supporting role in the education of students.

As it might appear to be a political issue, I will leave it to H-High-S network members to research this issue and the various petitions, political issues, etc. that are circulating about this matter, but as this addresses a core element of our network's raison d'etre, history education, I hope this will generate both interest and discussion.

Chris
You hit on a sore note with me. I could rant on the subject of our education system for hours. We are raising a bunch of idiots. They can't read-they don't know how many inches are in a yard-they can't think logically so they can't problem solve- they don't read novels or news magazines-they don't play musical instruments- they can't have a simple disagreement without it turning violent-they know nothing about our history or the history of the world and how what happens today is all related to that history on and on and on. I am so happy I have no children in the public schools. I fear for the future of our country. The gap between "the haves" (those who go to private schools) and the "have nots" ( those in the public schools) is growing daily. We must go back to giving our kids a well rounded education (including the arts) and go back to "if you don't learn it you stay in this grade til you do!" PHEW!! was that too much of a rant!!!

Please, Bev, don't hold back. Tell me what you really think ;-)

After 30 years of teaching, I realized that the kids were always alright. I have complete faith in them even though their formative years and education are so much different from ours. I always fall back on the Oaxaca's 10,000 years of history and that sometimes you're up and sometimes you're down. El Norte is in a down cycle after having a century or two of up cycles. Our institutions are mostly failing and letting us down and it seems to be a global thing. The richer are getting richer and that has worked out well in the past, repeatedly. I feel so fortunate to be a retired hedge-fund manger with 13 billion in y offshore accounts.... The kids are just as bright as we were and they will figure out how to adapt and clean up the mess previous generations have left them. Uh, they can sure type faster with their thumbs than we ever could, eh?

Yes, things look dire, but I remain optimistic.... and a fool, of course.