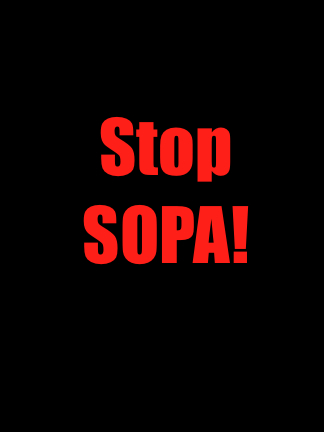 UPDATE: Here's a link to Tunecore,  my online music distributor.  It's a well-reasoned argument against SOPA and PIPA and one with which I agree.
Posted by Christopher Stowens at 1/18/2012 03:01:00 PM

Exactly - write to your CongressPerson.

Hmmmm, well okay. But, why? As someone who has made just a bare middle-class living from "creating" music, and still sees royalties and residuals that make the difference between a scary and comfortable month... I always wonder what are people's rationalizations that my work should be given away for free, no matter what I think. The idea of a "free" internet is (sadly) as nonsensical as a "free" market, but it is a separate issue from property rights. It never was and never will be free, so it's "freedom" can not be "destroyed" by these laws."Free" property has been the making of many, if not all of the internet fortunes, and so they raise their well-funded armies in blind support. You will still have the right to give away your photos and writing on this blog. But if it was the source of your income, your daily bread, you might not be so quick to do so, but at least you would have the right to choose. The new overlords always cast this as a fight against Hollywood corporations, when the reality is that it is just as much people such as myself, who might make .0005 on each stream. Louis CK is not an example of anything and nobody should tell me what my business model has to be (that's a pre-emptive argument :-) ). It is not surprising that all of the "artists" that are against these protections are financially fully supported by other activities/sources (often teaching).

Just as in another long-argued social question, this is a matter of "choice." I should be free to choose how my work is exploited or not. Yes, my work is derivative of many predecessors, but in itself, is its own work. If it is too derivative (a line that always brings interesting philosophical debate), there are other laws which I must abide by.

Just sayin', as your two word post smacks of a less then thought-out position... and I am never, opinionated ;-)

Well, my opinion is pretty well thought out, but I do have to admit that I am raking it in at $.02 a pop from my music being sold on many of the online music store. I mean, damn, last year, I might have made a whole twenty bucks. Also, too, I have been in the music/art scene for my whole life, so I am familiar with the issues. The only way to make money these days is touring and I am not gonna do that again. Listen, the recording and movie companies have been screwing artist for as long as I can remember and they have bought and paid for this legislation. They were hoping nobody would notice and they could have it passed at midnight during the holidays. Having guys like John McCain who can barely use a computer, making decisions on modern technological issues is, for me, akin to the banksters and lobbyists making the laws regulating financial institutions and corporations...'cause that sure has worked out, hasn't it? So I have thought about it. I just have learned that nobody really gives a sh*t what I think, so why sacrifice all those poor pixels. ;-)

So, you are a musical hobbyist ($20 a year) who would probably be happy if a song of yours went viral (for free) because, perhaps then you might tour (although if anyone ever sat down and did the math of real expenses to door receipts, you have to draw many hundreds a night to make it pay). So even if I put copies of your music up, for free, with big leading adds on google for anyone who searching out your music would download it from me (costing you your $20), you would still be happy, "they like me, they really like me."

It takes more then a plummy English accent and calling something Copyright101 to notice who has an interest in allowing work to be taken. As someone who has been making an income from my copyrights for longer then probably every principle of TuneCore put together, I would not give them a passing grade in their own course.

There are times when the RIAA and those "boooo, hissss" corporations have concerns that are not unaligned with unaffiliated music creators (and I have been raped by the best of them, I am curiously proud to allow).

The bottom line, as is still understood better in Western Europe (we tend to align our ideas in this area, with North Korea and other such bastions of freedom) is that the very idea of "copyright", which defines as property, something that is not quite grasped by the average intellect, is at stake. I do not take it so personally that the area that I work in, media and its music, is so particularly singled out for theft, but I resent the lack of sophistication in the arguments, sounding like packs of spoiled brats who want what they want and that should be enough argument (banging shoes on tables, mob intelligence). I think the philosophical concept of patent/copyright is a worthwhile subject for argument. Royalties are called royalties because one's ownership is granted by "the king." Of course, this is the same with real estate, it is only a paper filed in city hall that allows you to collect rent, and have the police evict if it is not paid.

Wikipedia (whom I have supported financially, but shall not anymore), and Google, ARE the new type of corporate bosses. They have all of our ears, the most effective type of lobbyists, look how fast our government jumped (I suspect that Google will be broken up like MaBell was, in the next decade or two). Yes, the media companies have their offices filled with attorneys whom, perhaps because a lack of legal clarity makes them paranoid, behave like godzillas. But I have had friends who are nobodies who have videos on YouTube that contain bits of copyrighted images who have successfully argued the "fair use" argument. If the corporate godzillas were free to go after the true thieves (PirateBay etc.), they may well leave the obviously "fair user" alone.

Oh well. I am sure I am just as often apt to lazily run with the pack when it is a subject I care less about, so I will put the subject down here. Thanks for allowing me this little corner to get it off of my chest.

I have to laugh, "a musical hobbyist"... yeah, one with a Masters in Composition from one of America's finest conservatories, one with hundreds if not thousands of performances and gigs, hundreds of recordings, reviews in newspapers around the world, BMI affiliate, classical compositions that have gone as viral as any classical piece can go, rock, jazz, funk, you name it, accompanist for many pros, concerts all over the world, premieres in the Kennedy Center in DC, NYC, LA, albums, operas, CD's, radio, TV... I have been a musician for 57 years... uh, if that makes me a hobbyist, party on Garth;-) It ain't like I don't know what I am talkin' about even though it may appear as such.
The horse you ar worried about is so long out of the barn, that it is in the glue factory.
I don't know what the answer is, but it sure ain't those bills. They need serious revamping... so I will just keep vamping until then.

Has "Oaxaca- The Year After" been blacked out also? This bickering has nothing to do with Oaxaca!