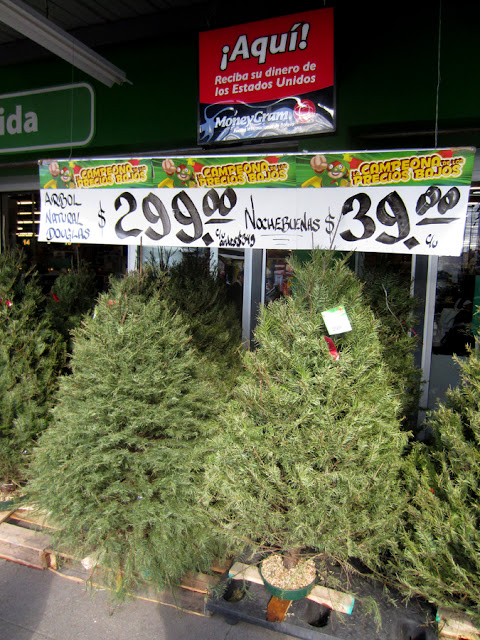 Have your tree yet?  I guess they can be pretty pricey, but here they are reasonable if you don't mind a dry one with no fragrance.  I love how they have them sitting in a shallow dish of sand.  Who knows maybe that is the secret to keeping them fresh and moist.  These however, were looking pretty dry and brittle.  But hey, the price is right about $22 US. 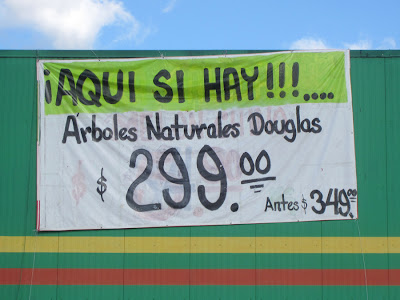 Did you know that depending where you live, there is a good chance that a mexicano harvested your tree?


BEECH MOUNTAIN, North Carolina – The Christmas tree industry in North Carolina continues to depend on Mexican labor to keep alive the tradition of placing natural pine trees in homes for the holiday season.

According to figures compiled by the North Carolina Christmas Tree Association, there are 1,600 tree farms in the state that harvest 5 million pine trees – and plant 50 million – per year on 25,000 acres of land, most of them Fraser pines, the one best-known for its particular fragrance.

It is estimated that more than 27 million U.S. homes will put up a tree during the month of December to brighten the festivities.

....during the 1980s the first Mexicans hired by farmers under the H2A visa program began arriving in the state.

“In the last 25 years, the labor force has changed,” said Hamilton, who carried out a study on the impact of the Hispanic labor force in the industry.

“It began with farmers in the state, their families, including students, but with growth they needed workers from other places and the Mexicans ... began arriving there.”

One of those workers is Mario Tehandon, 42, who along with his four brothers were the first Mexicans to settle in Avery County to devote their efforts to the Christmas tree industry.

“It’s a very hard job, of 12 or 14 hours a day. We have to get up at 5 a.m. to work, even in the rain and even when it’s frozen because you have to cut the pines no matter what the weather is,” Tehandon told Efe.

He is in charge of 30 employees, all working for the Triple H Pines firm, which annually cuts 50,000 Fraser pines.

“We Mexicans have gotten ourselves ahead in this industry, because trees from here are distributed to Texas, Mississippi, New York, and that’s a source of pride,” he said.

Hamilton emphasized that the Christmas tree industry continues to depend on seasonal workers who arrive in the state every year to harvest and prune the little trees, given that the “natives have devoted themselves to other jobs.”

I think there are some things unsaid in the story, like are they all documented workers, but at least the story has a positive spin to it.  Better than Arizona, Alabama, Georgia,.......
Posted by Christopher Stowens at 12/07/2011 07:22:00 PM