Am I missing something? 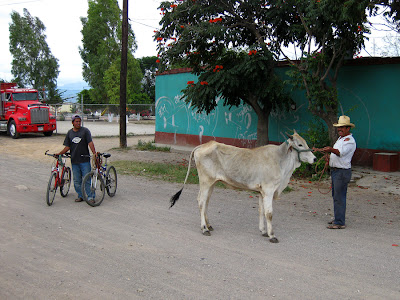 I'm sorry.  Maybe you have to in country to understand the wisdom of this, but from the outside, it just looks crazy.  Too much for this pobre campesino, who is going outside to shovel abono, real manure, instead of this BS.


America's growing drone operations rely on hundreds of civilian contractors, including some, such as the SAIC employee, who work in the so-called kill chain before Hellfire missiles are launched, according to current and former military officers, company employees and internal government documents.

Relying on private contractors has brought corporations that operate for profit into some of America's most sensitive military and intelligence operations. And using civilians makes some in the military uneasy. At least a dozen defense contractors that supply personnel to help the Air Force, special operations units and the CIA fly their drones are filling a void. It takes more people to operate unmanned aircraft than it does to fly traditional warplanes that have a pilot and crew.

The Air Force is short of ground-based pilots and crews to fly the drones, intelligence analysts to scrutinize nonstop video and surveillance feeds, and technicians and mechanics to maintain the heavily used aircraft. "Our No. 1 manning problem in the Air Force is manning our unmanned platforms," said Gen. Philip M. Breedlove, Air Force vice chief of staff. Without civilian contractors, U.S. drone operations would grind to a halt.

About 168 people are needed to keep a single Predator aloft for 24 hours, according to the Air Force. The larger Global Hawk surveillance drone requires 300 people. In contrast, an F-16 fighter aircraft needs fewer than 100 people per mission.

With a fleet of about 230 Predators, Reapers and Global Hawks, the Air Force flies more than 50 drones around the clock over Afghanistan and other target areas. The Pentagon plans to add 730 medium and large drones in the next decade, requiring thousands more personnel. The Air Force is rushing to meet the demand. Under a new program, drone pilots get 44 hours of cockpit training before they are sent to a squadron to be certified and allowed to command missions. That compares with a minimum of 200 hours' training for pilots flying traditional warplanes.