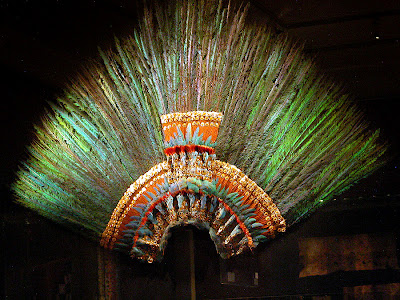 It must be in Mexico because it is such an important Mexican artifact, right?  Wrong!  It has been in Vienna, Austria since 1575.  A quick search reveals that its return or even just a loan of it to Mexico has been under negotiations for a very long time.  There is so much wrong with this story, I will let you figure it out.

from the LAHT (emphasis added)


The Austrian government has approved a bilateral pact with Mexico governing the loan of cultural artifacts, an agreement that could pave the way for a headdress believed to have been worn by Aztec ruler Montezuma II to be temporarily brought to the Latin American country.

The treaty, negotiated over nearly two years and approved earlier this week by Austria’s Cabinet, is aimed at resolving a decades-long dispute over the spectacular feather-work crown, a spokesman for Austria’s Culture and Education Ministry told Efe Thursday.

The goal is to “create international legal certainties regarding temporary loans of cultural property,” the spokesman said.

The treaty, negotiated between each country’s ministries of Culture and Foreign Affairs, does not address the matter of ownership over any cultural objects that may be loaned out, he said.

Both countries’ legislatures must ratify the treaty before it enters into effect, which in Austria’s case could occur “in a matter of months,” the spokesman said....

Under no circumstances will the Austrian government permit the headdress to be permanently transferred to Mexico, he said, adding that to his knowledge the Mexican government still has not approved the bilateral accord.

The priceless artifact, made of 400 bronze-green quetzal feathers mounted in gold and studded with precious stones, is an important Mexican national symbol traditionally believed to have been worn by Montezuma II, the Aztec emperor at the time of the arrival of Spanish conquistadors in 1519.

The headdress became part of the collection that Ferdinand II, Archduke of Austria – nephew of Charles V, Holy Roman Emperor – held at Schloss Ambras in Innsbruck, Austria at the end of the 16th century.

It was only in the 19th century that the piece was determined to be of Aztec origin.

Some Austrian experts say the feather-work crown did not belong to Montezuma II but instead was an ornamental element used by priests, although they acknowledge the headdress’ significance in Mexican culture.