The zocalo in Oaxaca is one of the most beautiful spot in the city.... sometimes.  This ancient park has been the central meeting spot for hundreds of years.  Here's what it looks like today, filled with tents as los maestros, the teachers, have once again established a planton, a sit-in (sleep-in,) closing the space off to everyone else.  And they brought with them the vendors that are a part of the union's movement.  It's ugly and not at all representative of what Oaxaca has to offer. 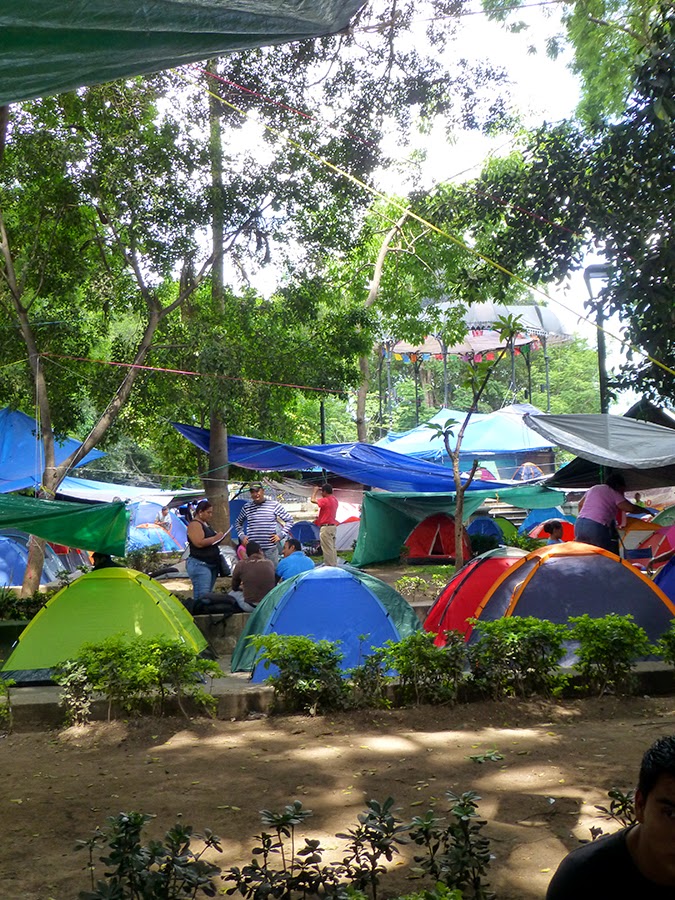 Of course, for the most important cultural and economic weeks of the year, weeks in which Oaxaca is the destination for tens of thousands of tourists, the teachers do their normal thing.  Ruin things as much as possible for as many people as possible.  Listen, I am a former teacher, but I have a very hard time supporting the antics and tactics of Sección 22 del Sindicato Nacional de Trabajadores de la Educación (SNTE).  They march, they blockade, they act like nothing else matters.  All they seem to do is piss people off while at the same time doing an even greater disservice to the children and their families for whom they are supposed to be serving.  They have shut down roads, shopping malls, governement offices, all during the busiest month of the years.  Can we talk about chaos and inconvenience?  Nuf' said.

I am not sure what this newspaper is about, but I like the Freddie Kruger image, because sadly, sometimes, it's a nightmare.... but not on Elm Street. 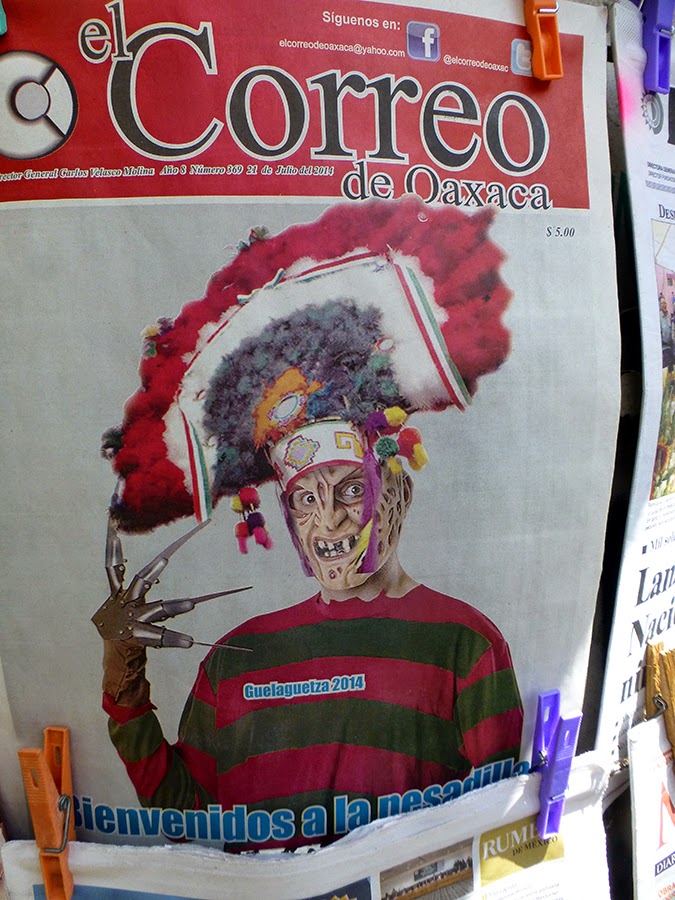 Meanwhile, the government protects the protesters while ignoring the pleas of the majority of the population who have said repeatedly, "Ya basta!"  "Enough already!"
Posted by Christopher Stowens at 7/24/2014 11:49:00 AM

I'd like to make sure I understood correctly: those people under those tents are teachers, TEACHERS??? If so, I am so glad my daughter is not one of their pupils....

They should know better how to fight for their rights without interfering with the history and the culture of that beautiful city...


For me it looks the same when I see in my native St. Petersburg names of the new restaurants in the historic center of the city. Those names loosely translate from our jargon into something like "Mother of that S.O.B." And I get so infuriated and sad in the same time...how could they/us allow that to happen???

I went to the zocalo last night and thought Oaxaca never looked uglier. Of all the years here this is the worst I have ever seen. Tents packed around the kiosk, bottles of pee. Vendors covering every inch all the way to Independencia. At one point I was trapped between vendors and the wall with no way out. Muchisimas people because it's Guelaguetza time. And.....a calenda!!

INTERNATIONAL CONCEPT OF WORK FROM HOME
Work from home theory is fast gaining popularity because of the freedom and flexibility that comes with it. Since one is not bound by fixed working hours, they can schedule their work at the time when they feel most productive and convenient to them. Women & Men benefit a lot from this concept of work since they can balance their home and work perfectly. People mostly find that in this situation, their productivity is higher and stress levels lower. Those who like isolation and a tranquil work environment also tend to prefer this way of working. Today, with the kind of communication networks available, millions of people worldwide are considering this option.

Women & Men who want to be independent but cannot afford to leave their responsibilities at home aside will benefit a lot from this concept of work. It makes it easier to maintain a healthy balance between home and work. The family doesn't get neglected and you can get your work done too. You can thus effectively juggle home responsibilities with your career. Working from home is definitely a viable option but it also needs a lot of hard work and discipline. You have to make a time schedule for yourself and stick to it. There will be a time frame of course for any job you take up and you have to fulfill that project within that time frame.

There are many things that can be done working from home. A few of them is listed below that will give you a general idea about the benefits of this concept.

Baby-sitting
This is the most common and highly preferred job that Women & Men like doing. Since in today's competitive world both the parents have to work they need a secure place to leave behind their children who will take care of them and parents can also relax without being worried all the time. In this job you don't require any degree or qualifications. You only have to know how to take care of children. Parents are happy to pay handsome salary and you can also earn a lot without putting too much of an effort.

Nursery
For those who have a garden or an open space at your disposal and are also interested in gardening can go for this method of earning money. If given proper time and efforts nursery business can flourish very well and you will earn handsomely. But just as all jobs establishing it will be a bit difficult but the end results are outstanding.

Freelance
Freelance can be in different wings. Either you can be a freelance reporter or a freelance photographer. You can also do designing or be in the advertising field doing project on your own. Being independent and working independently will depend on your field of work and the availability of its worth in the market. If you like doing jewellery designing you can do that at home totally independently. You can also work on freelancing as a marketing executive working from home. Wanna know more, email us on workfromhome.otr@gmail.com and we will send you information on how you can actually work as a marketing freelancer.


Internet related work
This is a very vast field and here sky is the limit. All you need is a computer and Internet facility. Whatever field you are into work at home is perfect match in the software field. You can match your time according to your convenience and complete whatever projects you get. To learn more about how to work from home, contact us today on workfromhome.otr@gmail.comand our team will get you started on some excellent work from home projects.

Diet food
Since now a days Women & Men are more conscious of the food that they eat hence they prefer to have homemade low cal food and if you can start supplying low cal food to various offices then it will be a very good source of income and not too much of efforts. You can hire a few ladies who will help you out and this can be a good business.

Thus think over this concept and go ahead.