Problems, problems, problems.... the wheels come off as, in anticipation of the June 7 elections protests and violence continue unabated.  I have to imagine that there will be some sort of a governemental response, but given that this is Oaxaca, that remains to be seen.
Photo from Noticias 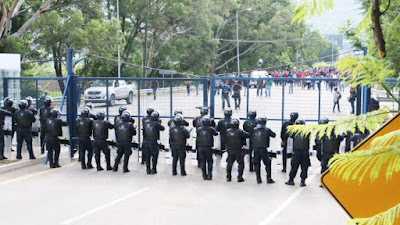 Seccion XXII seems hell bent on making life hard for everyone.  Yesterday they blocked and then stormed the international airport.  Flights in and out were cancelled.

You can tell from this Noticias story and the accompanying photos just how out of control things appear to be.

The protests are widespread.  This from the LAHT and Tixtla in Guerrero


Twelve people were injured on Wednesday when Mexican federal police intervened to prevent a march by the families and supporters of 43 students kidnapped last September and presumed dead....

Meanwhile, around 300 people, including teachers and members of the unofficial community police force, blocked access to Tixtla as their comrades burned posters and leaflets touting candidates in Sunday’s elections.

The aim of the mobilization, a teacher identifying himself as Miguel Angel told Efe, was to demand the safe return of the 43 students and the repeal of the education overhaul enacted in 2013 by President Enrique Peña Nieto.

“We will impede the elections” to force the government to meet those demands, the teacher said.

The activists are determined that elections will not take place in Tixtla and they have a “well-planned” strategy to prevent the voting, Miguel Angel said.

See, the thing is that making one of the demands that the students be returned alive is well, simply not going to happen for obvious reasons.  It is an unreasonable demand that cannot be met and condemns the process to failure.  I guess protesters gotta protest.  It looks like it going to be a rough week,
Posted by Christopher Stowens at 6/04/2015 07:05:00 AM