I was walking through Llano Park yesterday and saw a large group of people gathered around something or someone, so I went to investigate.  It turned out to be Enrique Morales, an artist of a different sort, but still every bit an artist as the others.  Here, I have been shooting all the big guns and this guy totally captured my imagination.  I just stood and watched him along with everyone else.  He was a handsome guy and a good street performer.  As he sprayed with one hand, he had a lighter in the other, so there were bursts of flame as he worked.  Using the simplest of tools and objects, a putty knife, pieces of paper, plastic plates, he created what I think is really cool art.  The boy is good!  I missed the very beginning, but here is much of the process and the finished painting. 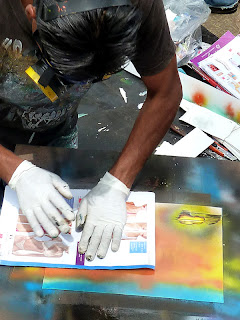 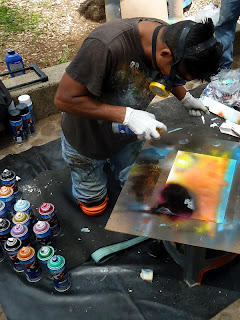 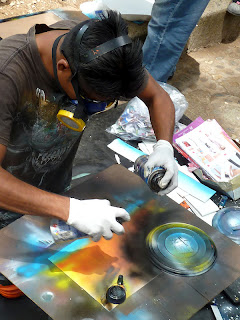 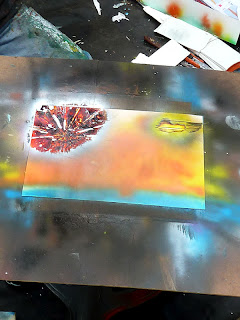 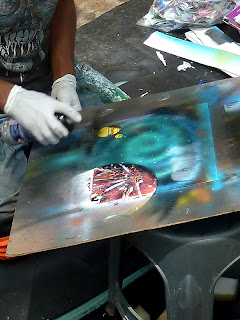 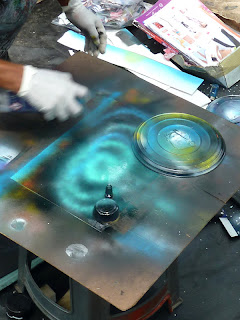 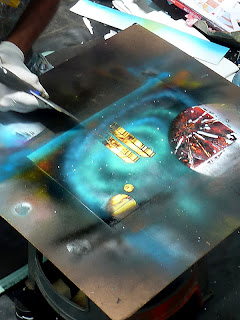 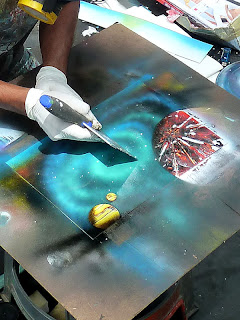 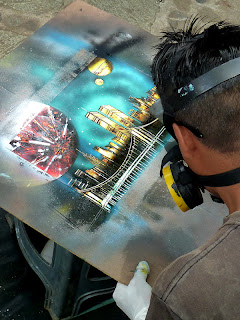 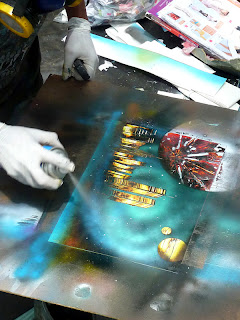 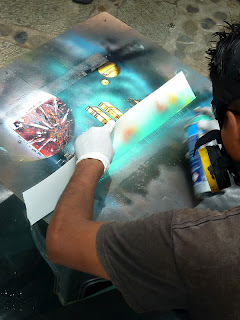 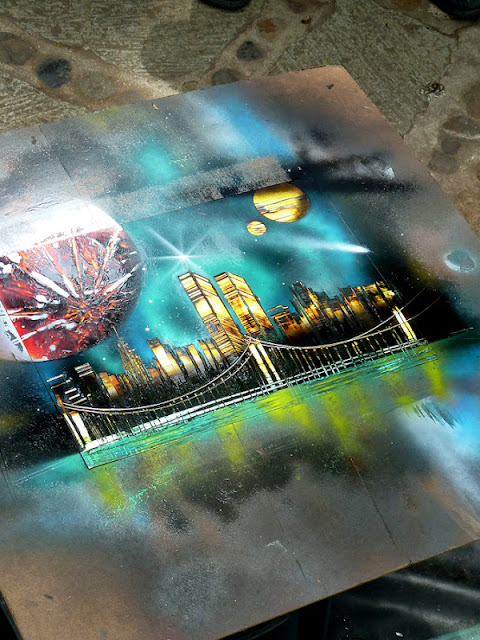 I am kicking myself because I did not get a photo of his face.  I thought of it just as I crossed the street into Jalatlaco.  I shoulda gone back.  As I said, he was a handsome kid, spoke English well and had it totally together as far as I could tell.  I am going to keep my eyes open for him.  I hope I can find him again so his portrait can go in with the others.
Posted by Christopher Stowens at 9/08/2012 01:35:00 PM

I have seen and watched Enrique many times in the Zocalo. What has always struck me is that his face is always looking down or covered by the spray mask so I think you captured him accurately.

Enrique is quite the show and seems to sell many pieces.

Please know that I'm not Heating on Mr Morales ,if u Google him u find his far from been quiet ,these man stold my full performance from repeating my images to imitated my show that includes copyright music that i composed for my show ,i struggle for many years trying to get this man to stop ,i didn't want legal problems connected to my hard working business that i continue to built on , but Mr Morales refuge to corporate he would cursed at me every time i try to settle that matter, after several years Mr Morales talk him self in to one of my high contract in which he presented fake passport and other U.S legal Documents when question he was ask to leave the premises he said he would come back with renew passport but they knew he was lien , when i when back i discover Mr Morales was also been accuse of try ing to lower teen age girls after he was ask to leave they had several parents calling in ,the park discover they had no real id ,i took the justice road i went to the courts and they advice me to field in case he becomes legal i can go after him for all the years he in-french on my business ,i fanaly had him serve in Virginia ,the courts also got imagination involve ,his been deported other time ,i know of to other that were defrauded by him one s lady that took out a city permit for him ,he.left her with city ticket of 300.00 dollas ,another lady open her home to him & family memb and lost money & jewelry , i found he would offered people copy of my music .this man work his way into my business with lies from tellin me he had a broke relation with his family to have taking college courses in video productio ,i aloud him to film me ,i let him use my music for my video ,well i nevet got my video ,instead he copy absolutely every thing including changing his look ,any one that knows him will tell he always has had long hair ,last time he came back to the states after been deported he try to change his name ,so be carefull ,I'm Latino & come from immigrants parents i thought Mr Morales was my friend but my family warn me that he was not a friend,i fail to belive until it was too late , i realy hate to share this ,but if i don't another brother or sister latina may get ripoff by Mr Morales ,wat really bittes is that his very much latino but he don't care not even for his own people, ,I'm very sorry if i offend any one.
Thank you for your time .