The house of Arnulfo Mendoza sits high atop a hill overlooking Teotitlan del Valle and that is where many people gathered to pay their final farewells to the maestro.  There was a band.  There were flowers.  The men sat in one area and the women in another according to tradition.  The mood was somber, but not overwhelmingly sad.  People talked and drank a little, shared stories and memories. 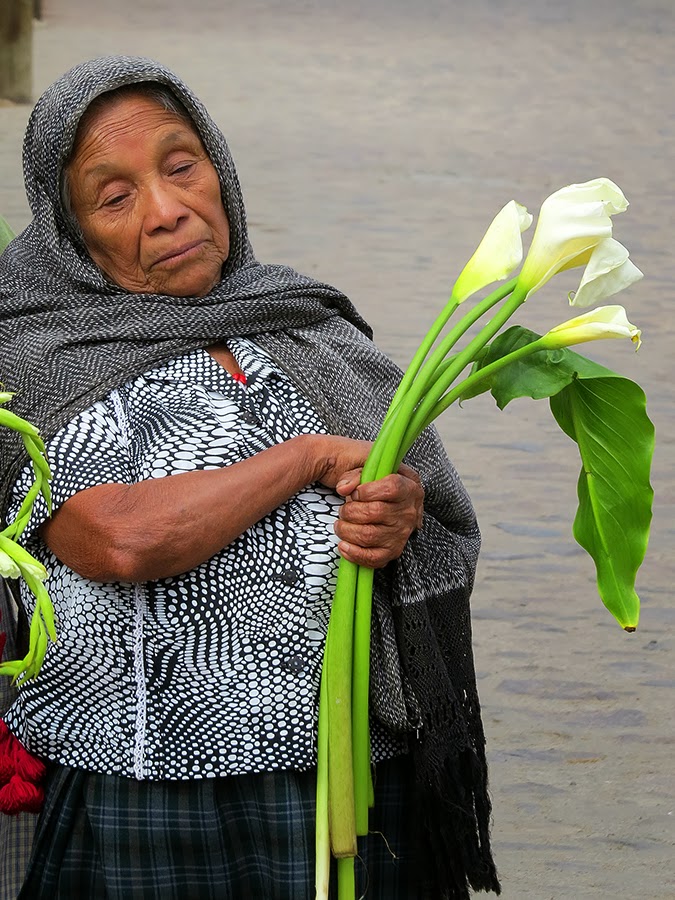 Then the casket was lifted and the long procession to the church began.  The hill was very steep and the pallbearers stopped regularly to catch their breaths.  It may have taken an hour to make it down to the church, but really, I lost track of time. 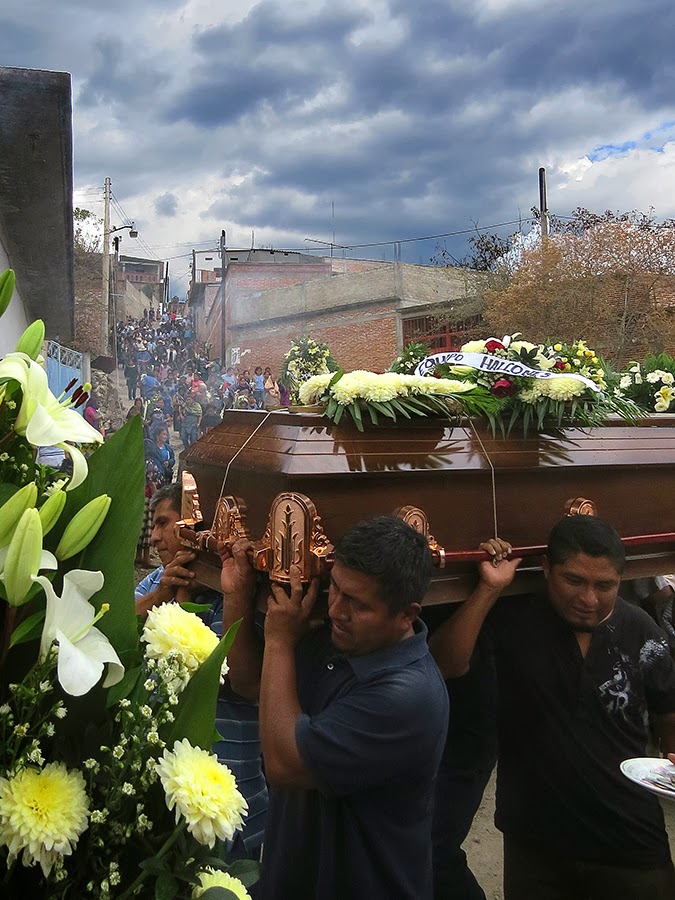 It was difficult to watch his family and friends grieve for I have my own grief.  I was still Arnulfo's photographer and I had shot him in so many places and circumstances, I think he would have wanted me to keep shooting.  However, behind it all, there are many personal connections.  Not only was he my friend, but there was my ongoing work with Arnulfo and my connections to his extended family and to many in Teotitlan del Valle, one of my favorite places in all the world.  So I just kept shooting. 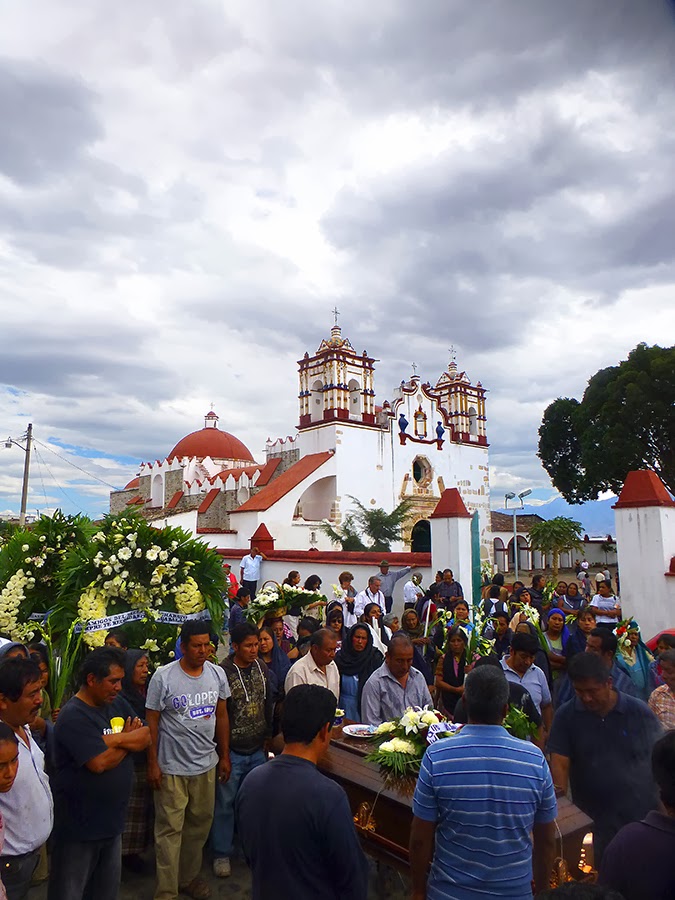 Here is his cousin, Sergio Ruiz, whose wedding I photographed.  That is Gabriel, Arnulfo's son just behind him. 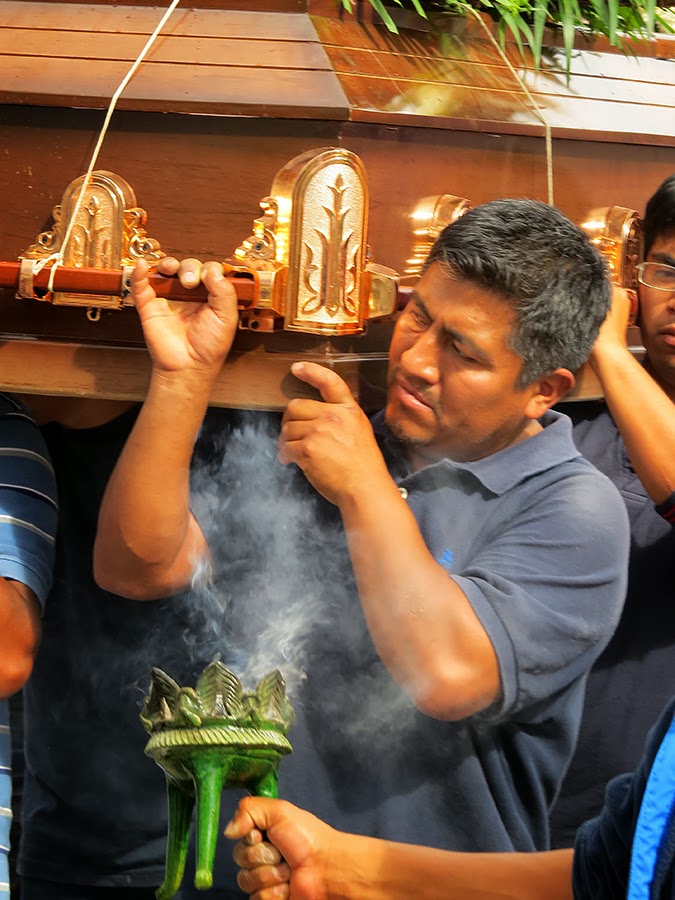 The casket was carried into the church and a mass followed. 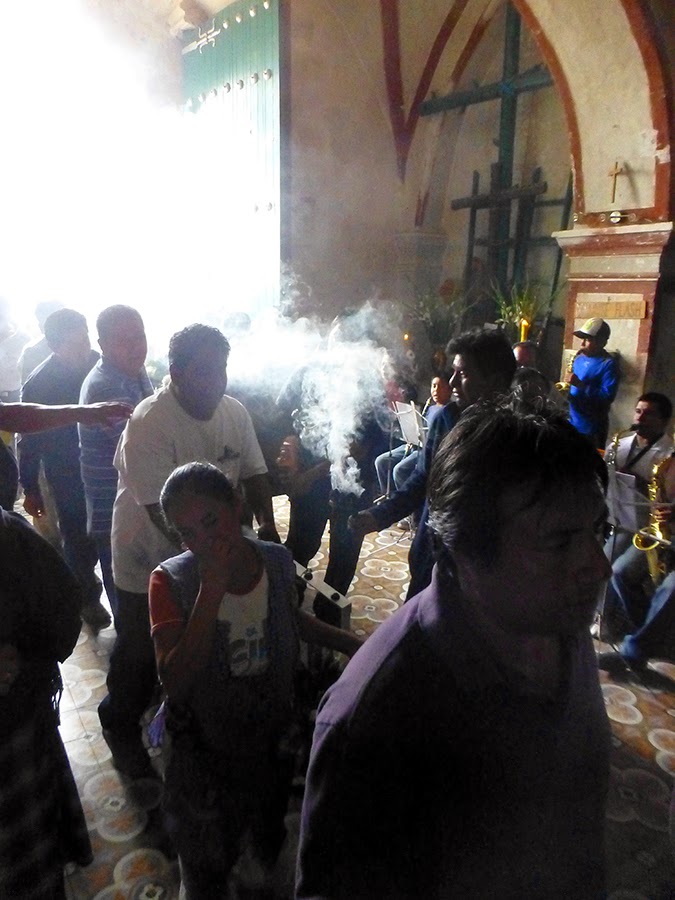 Then the long procession to the panteon or cemetery.  We walked the same route that they walk for the confites except we ended up at the panteon. 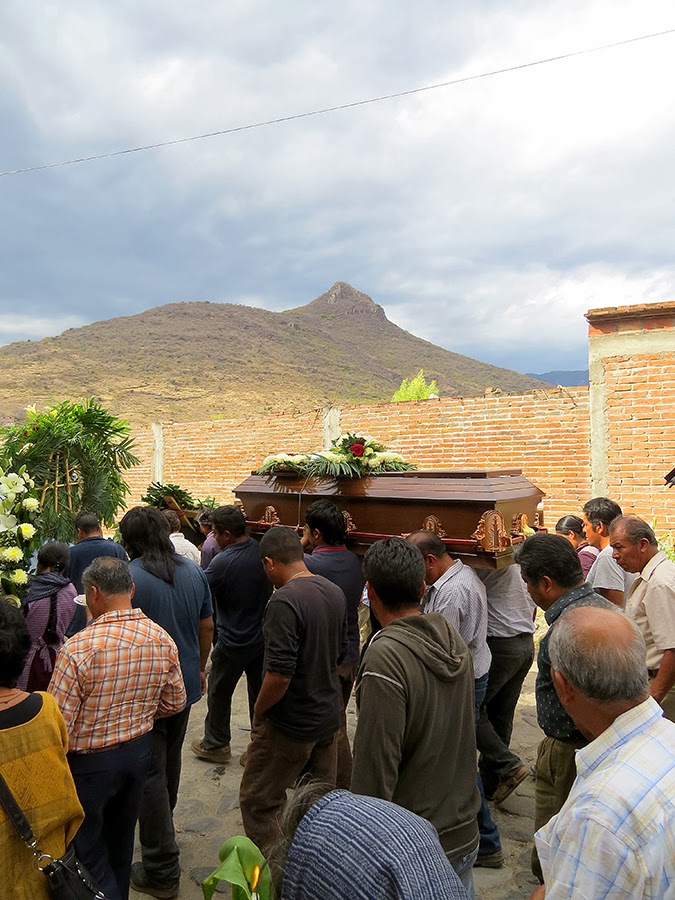 It was a long walk.  The band played somber music.  The casket was rested on a portable platform while the pallbearers caught a break and blessings were made. Finally, we arrived at the panteon where the grave awaited.  And after a few speeches, Arnulfo Mendoza was laid to rest. 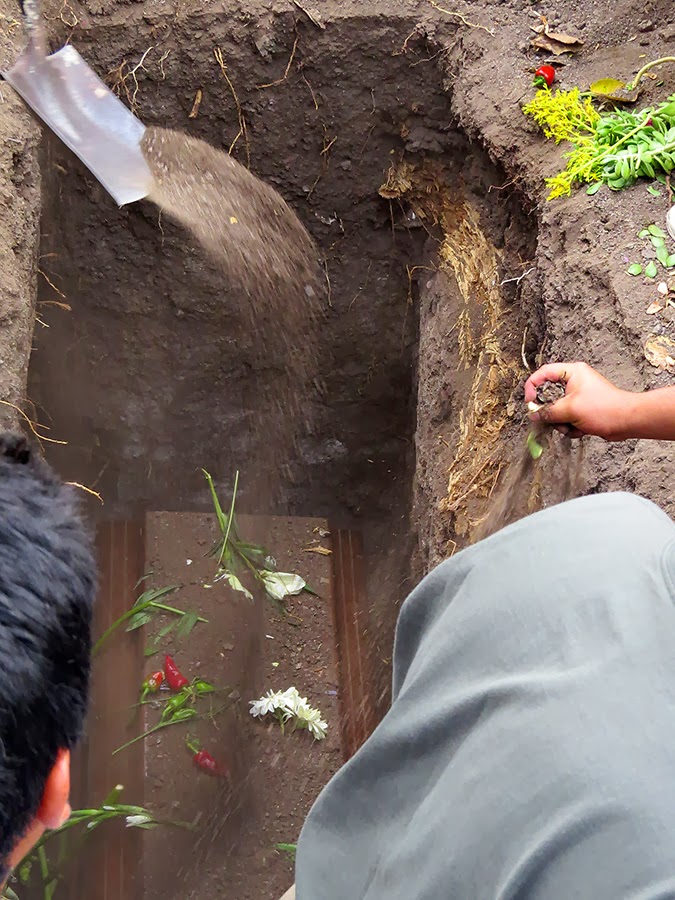 The atmosphere was tranquil.  There were moments of abject grief and soon thereafter, moments of calm and levity. 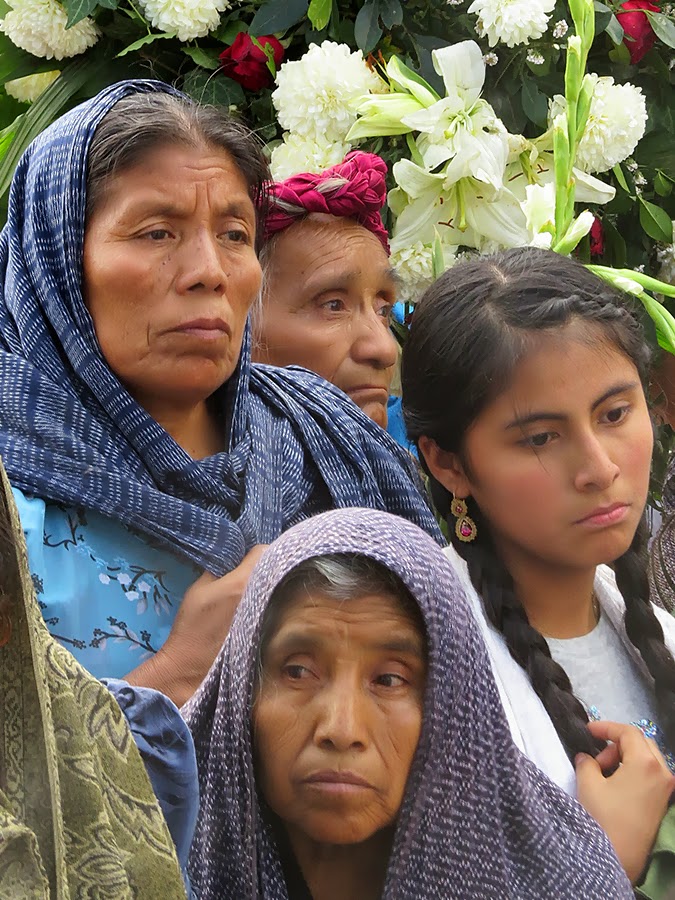 Of course, I took shots of the family, but they deserve privacy.  However, this one of Arnulfo's wife, son and mother made me cry. 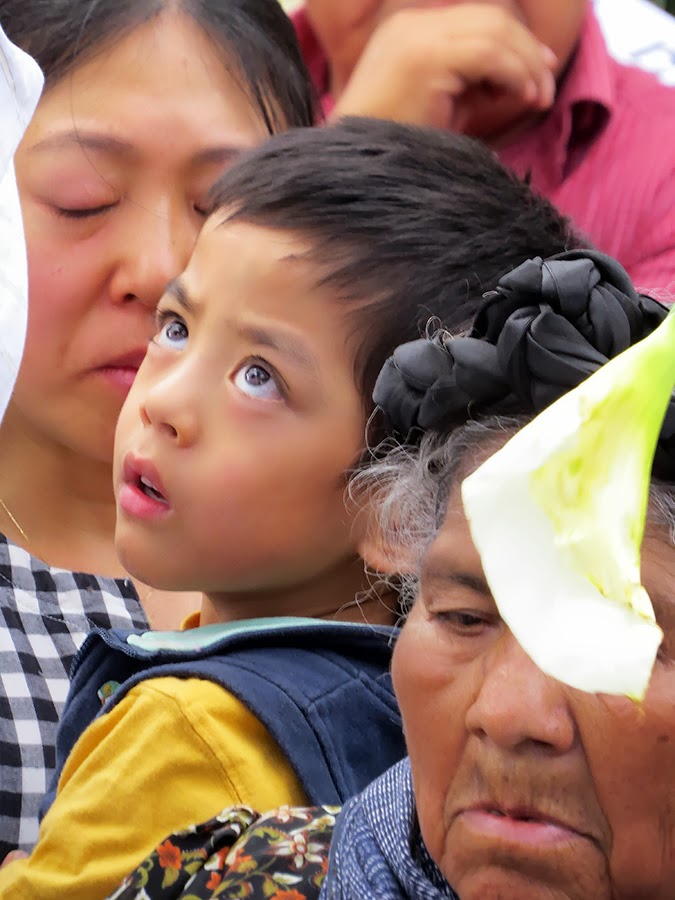 Above all, there were those magical qualities of community and tradition that held the whole thing, and me, together. 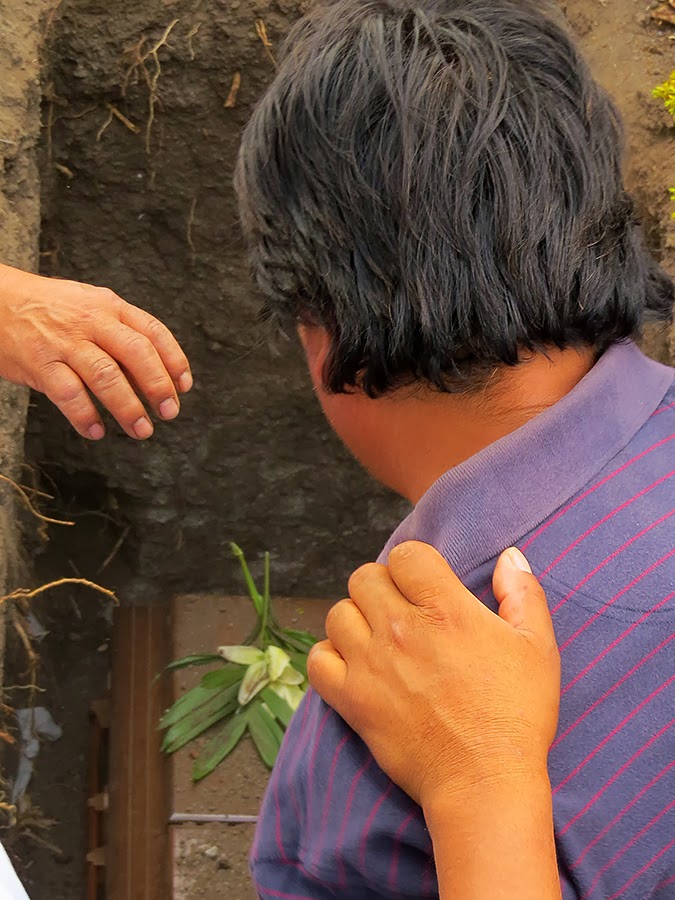 Bev and steve in ct said...

So professonal of you to have carried on with your work despite your personal grief. Thanks for posting these moving pictures.

Truthfully, keeping behind the lens helped me keep it together.

Thank you, for these beautiful photos and the effort you put forth to do be able to do this, Chris. I am having a very hard time believing he is gone. It just doesn't seem real.

Grief of others, always takes me to my personal grief, to those points in my personal timeline, when dark holes of longings has been permanently pierced in my heart.

Again, many thanks for your photographs and comments. I loved Arnulfo and his family, and will always miss him.
Kate Regan Rayner

I am in shock today and working in el campo trying to get as tired as possible... I think I succeeded.

The table on which I am typing has one of Arnulfo's rugs under glass. It makes me realize that he lives on in his many works or art. I imagine it is a huge number and that makes me smile.

I'm so sorry for your loss and the loss to many who loved and knew Arnulfo and his art. Your photos are beautiful. I truly understand "keeping behind the lens helps in emotionally difficult times."

I just got an email from a Mendoza brother about Arnulfo's passing. A great artist and very nice man gone far too soon. I looked online for more info. and found your blog, and am very touched by your fine photos. Thank you.

Thanks for all the kind thoughts and condolences. I will be sure to pass them on to the family.

Rest in peace couisin life is short. Only God know what tomorrow will be. My deepest condolence to the whole family.